UPDATE: Crossroads College Prep Jazz Ensemble will no longer be able to perform on Thursday December 6 or December 13.

This warm weather may have you thinking differently, but ‘tis the holiday season! Metro has some awesome musical acts lined up to brin 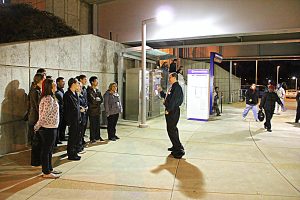 g the holiday spirit to a Metro Transit Center or MetroLink Station near you!

Celebrate the Season Concert Series features two performances this week. Take advantage of the warm weather and catch a performance during your lunch hour or on the rails on Saturday. 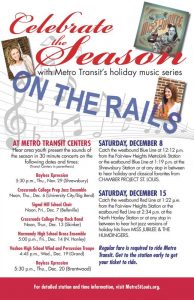 On Friday at noon, 40 students in the Signal Hill Middle School Choir will sing carols at the Belleville MetroLink Station.

On Saturday, the Chamber Project St. Louis will perform on board the Holiday Magic Train on the Blue Line, departing from the Fairview Heights MetroLink Station at 12:12 p.m. and returning at 2:11 p.m. With your Metro pass or valid fare, you can stay on the Holiday Magic Train for the entire show or make it part of your Saturday outing by catching the train at any stop along the route. (See where to catch the train below.)

Don’t miss out on some holiday cheer this year!