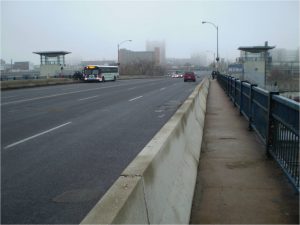 MetroLink’s Grand Avenue Station is about to undergo a substantial redesign with exciting improvements to become the Scott Avenue Transit Plaza – all while the City of St. Louis replaces the Grand Avenue Viaduct with its own exciting design over the MetroLink tracks.

In cooperation and conjunction with the City’s project, Metro is at the same time improving the MetroLink Station, bus waiting area, and passenger amenities: The Scott Avenue Transit Plaza Project!

Meanwhile, the City of St. Louis will be replacing  the six undivided lanes with four divided lanes plus dedicated bus pullouts (no more buses stopped in traffic on the bridge!), widening sidewalks, and improving pedestrian accommodations on the bridge. The city’s intent is to make this a “signature bridge” for St. Louis.

The new transit plaza area will be built under the bridge where the bridge piers (supports) are located now. (Those piers will be removed when the City demolishes the current bridge.) If you’re finding this hard to visualize, please check out the nifty slideshow we put together for Saint Louis University about this project. 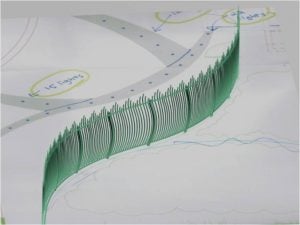 Metro is working with an artist, Barbara Grygutis, who has helped make the design of the plaza more “organic” and welcoming, with touches like enhancing the fence to a decorative iron fence and using different colored paving stones, including some clear blue stones that will be lit from below with LED lights. Ms. Grygutis will also create a lit art piece in her unique style that will help enhance the area. Check out her website for some images of her previous work. Ms. Grygutis’s work on the project is funded from the 1% public art and enhancement funds as required by federal guidelines.