An Inside Look at St. Louis Downtown Airport and Its Massive Fire Engine

I took a tour recently of the St. Louis Downtown Airport which is owned and operated by Metro and got an inside look at the airport fire department. Aside from sliding down the fire pole and making a slight fool out of myself, I got to ride in one of the largest ground vehicles I’ve ever been in before. 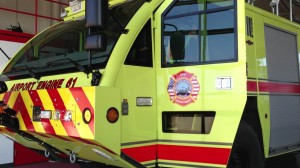 The building, which was dedicated in January 2011, was constructed to meet FEMA tornado and earthquake survivability requirements.

Mavrogeorge was hired in April 2008 to create the airport fire department from scratch. The airport became FAA certified on August 4, 2008 and an Airport Rescue and Firefighting vehicle was required. To meet that requirement, the airport leased a 1985 Oshkosh T1500 until it took delivery of Airport Engine 61 in 2009. The specialized fire engine was purchased with Federal Airport Improvement Program Grant Funds in order to provide the airport with FAA required airport rescue and firefighting capability (ARFF).  ARFF trucks are designed to discharge large amounts of water, foam, and dry chemical on burning aircraft fuel in order to give the occupants a chance to be rescued. 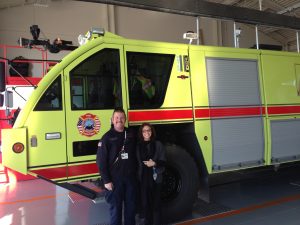 I was lucky enough to take a short ride in this massive vehicle. Sitting in the front seat, I felt like I was inside a Transformer! Believe it or not, even at 60 miles per hour, the vehicle was relatively quiet (Video below).

A monitor inside the vehicle displays what a Forward Looking Infrared (FLIR) camera detects. The FLIR identifies heat. If there is smoke in front of the vehicle, the driver can see through the smoke to the fire.

This impressive truck allows the airport to respond to fire and rescue emergencies involving aircraft as large as Boeing 737s and 757s.

1 thought on “An Inside Look at St. Louis Downtown Airport and Its Massive Fire Engine”