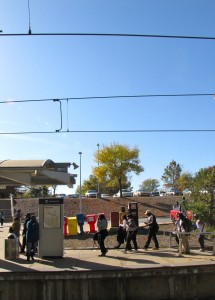 MetroLink passengers can expect occasional delays and MetroBus shuttles during the construction period. We will let customers know in advance of those operational changes.

The cost of this part of the project is $1.2 million and is funded by the American Recovery and Reinvestment Act. The general contractor is R.V. Wagner, Inc.

10 thoughts on “As Rail Improvement Project Begins, Section of UMSL South Park-Ride Lot Will Close Until 2013”