Attending an Event in St. Louis This Weekend? Take Metro

A busy weekend in St. Louis is upon us with the Cardinals hosting the Cubs, the Blues in action, Taste of St. Louis, Gateway Classic, and the Green Homes and Great Health Festival at the Missouri Botanical Garden. Metro encourages those who are attending any of these popular events to take public transit and avoid traffic jams and parking issues.

One of the highlights of the Green Homes and Great Health Festival tomorrow at the Missouri Botanical Garden is painting eco-murals on a Arts in Transit MetroBus from noon until 2 p.m. on the East parking lot. The festival runs from 9 a.m. to 4 p.m. and there are lots of other great activities for individuals, families and children.  The #30 Soulard, #95 Kingshighway, and #80 Park Shaw are the MetroBus routes that will get you to Missouri Botanical Garden.

The St. Louis Cardinals  could clinch the division title tonight or this weekend during the series with the Chicago Cubs. And baseball isn’t the only sports action in town this weekend. The Blues take on the Minnesota Wild tonight at the Scottrade Center and the Gateway Classic football extravaganza is at the Edwards Jones Dome this weekend as well.

If you want to be part of all the fun and festivities and want to save gas, avoid the traffic jams and not pay parking fees, take Metro. Walk to the MetroBus stop or park your car at one of our free Park-Ride lots and catch MetroLink downtown. 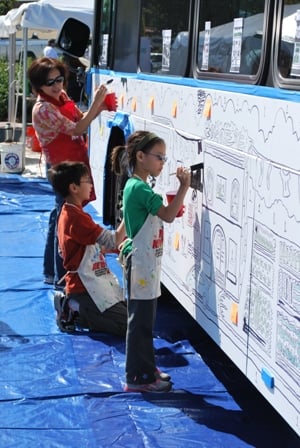 MetroLink is always a great option to get to the Cardinals games. Just hop off at the Stadium MetroLink Station or 8th and Pine Station, Convention Center Station, or Arch-Laclede’s Landing Station if you want to grab a bite to eat at a downtown restaurant before or after the game.

The Gateway Classic football game set for 2 p.m. Saturday at the Dome pits Central State University (Wilberforce, OH) against Tennessee State University. Events surrounding the game, all near the Dome, include a street festival, pep rally and nightlife on Friday and a parade and pre-party on Saturday. The Convention Center MetroLink Station is your stop for all Gateway Classic activities.

Getting to Blues games is a cinch on MetroLink or MetroBus. You can take MetroLink to the Civic Center Station which is conveniently located across from the Scottrade Center. As we said, many MetroBus routes also come into the Civic Center Transit Center which makes it easy for Blues fans.

Go to our website to plan your weekend trips on public transit so you can relax and leave the driving to Metro. Note that the new Trip Planner now features real time bus arrivals.

Have a great weekend.