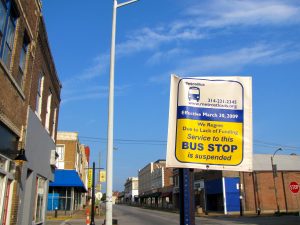 June 28 was only the first phase of our 2010 service restoration.  Phase II begins on August 30, with many significant changes for MetroBus service.  These changes include a number of new routes, route changes, increases in frequency to existing routes, connectivity adjustments, different bus sizes and other strategies.

Click here for a complete listing of all the route and timetable information for the August 30 service change.

Restoration 2010 changes do not exactly replace the Metro system that was in place before March 2009.  We conducted hundreds of public meetings and gathered a lot of feedback about the region’s needs.  So while the service changes do seek to return the level of service from March 2009, they also reflect the need to grow ridership, attract new markets, and leave room for growth in a cost-effective manner.

Restoration 2010 implements several innovative strategies to enhance service using available financial resources. These service strategies are not stand-alone improvements; they work together, often on the same bus route, to maximize productivity and cost effectiveness throughout the system.

Many MetroBus routes cover a large service area, especially on major corridors. However, ridership demand often varies greatly within any particular service area. In an attempt to better match frequencies, and ultimately vehicle sizes to levels of ridership demand, and to maintain on-time performance on what are very long routes today, Metro will split several routes where there is a clear difference in travel needs and ridership levels. These splits will happen at MetroLink Stations and Transit Centers in order to ensure quick transfers and enhance the overall connectivity of the System.

Ideally, the necessity for transfers should be limited. However, our customers should also be able to access any part of the service area from any other. Many of the route changes that will be implemented on August 30th will further integrate the Metro System by adding geographic connections and improving time connections between bus routes and at Transit Centers. Maintaining on-time performance and enforcing connectivity at transit centers is critical for ensuring the success of this strategy.

The MetroBus fleet currently consists of 30’, 35’ and 40’ buses. However, at certain times of day and in areas with lower transit ridership, larger buses often have excess capacity. As Metro moves forward with regularly-scheduled fleet replacement Metro staff is exploring options to begin purchasing smaller buses and vans for use on lower-demand routes, and larger, articulated buses for the busiest routes. Smaller vehicles with lower fuel costs making shorter trips will generate significant cost savings. Larger buses will allow the Agency to respond to growing passenger volumes without adding as much service as would be required using 40’ buses.

Service restoration seeks to minimize long or confusing, special detours, and duplication of service. Many routes have been streamlined, and more trips later in the day have been added throughout the System for 2nd- and 3rd-shift workers.

This is not the end of Restoration 2010 and transit in St. Louis post-Proposition A: it is the beginning.  We want your feedback.  Please leave your comments below, or email restoration2010@metrostlouis.org.