“Beyond the Motor City” Documentary Delivers Lessons for St. Louis and Entire U.S.

A review by Courtney Sloger

Last night, St. Louis hosted a free screening of Beyond the Motor City: The Past and Future of Transportation in the U.S. at the Tivoli Theater in University City.  Aaron Woolf, who wrote, produced and directed the film, joined viewers for dinner at Pi East Loop and spoke on a panel moderated by KETC’s Patrick Murphy following the film, along with U.S. Representative Russ Carnahan and Citizen for Modern Transit’s Tom Shrout.  The strong crowd of about 200 people (the majority of whom were 35-and-under) had very interesting thoughts and questions about the future of transportation, both locally and nationally.  The interest was not on all things flashy and modern: The big topic of conversation was how can we move transportation forward, and how can we pay for it. 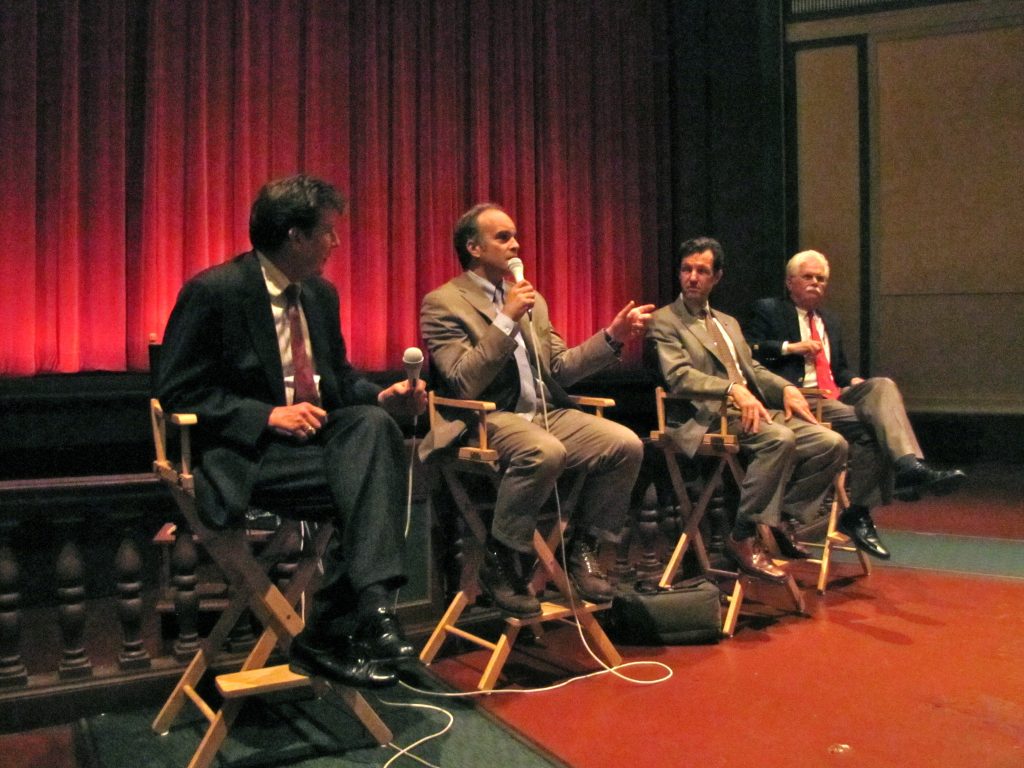 If you are reading a public transit agency blog, you likely have a heightened interest in transportation infrastructure.  Beyond the Motor City is not necessarily an all-in rally for public transportation.  It is a look into the history of transportation planning in the U.S. and how we have gotten to where we are today.  But it is also a call-to-arms for America to pursue long-term transportation solutions for a new economy: Not ones based on American auto manufacturing and inexpensive land and oil, but ones that will help us compete as global communities in a changing industrial and global world.  There is an emphasis on the plural of solution – we most likely won’t rise to our infrastructure challenges with a singular strategy.  Mass transit, roads, bikes, and pedestrian accessibility will likely all play roles, with an emphasis on connectivity and energy efficiency.

The film shows rich pictures and details of Detroit’s downtown area during its heyday in the 1920s – vibrant skyscrapers, retail and industries surrounded by neighboring burroughs and connected by bustling corridors with streetcars, automobiles and pedestrians.  The rise of the American automotive industry ushered in a boom for the Motor City, and many of the city’s residents and industry moved to the suburban areas with the explosion of highway infrastructure and affordability of the automobile.  Now the depopulated city (which had lost over half of its residents by turn of the century, but maintained its land acreage) is having problems affording services when people and places are so spread out.  Providing services like public transit, fire, police, streets works, sewers, etc. have become almost prohibitively expensive, and residents lament the loss of community that happens when people do not live and interact with one another on a daily basis.  The images of Detroit are stark, and the frustration of its citizens and leaders are palatable.  As the movie points out, there are very significant costs, both economically and socially, of sprawl.

Another of the more poignant points of the film is revealed when Spanish public officials talk nostalgically about the U.S., pointing out that the it was the model of transportation for the last century.  Now Spain, with its high-speed rail investments and leading in infrastructure manufacturing, looks to itself.

One hundred years ago, St. Louis was home to the country’s busiest railroad depot, Union Station.  Major cities at either end of the country looked in envy upon St. Louis’ comfortable nexus of transportation, the circulatory system of commerce and travel in the U.S.  But our transportation system redefined itself during the automobile age, largely leaving behind the nation’s system of railroads and streetcars.  Not only has St. Louis become a different city, but the ways that we philosophically view and use transportation have changed in the U.S.  Information moves instantly, but we’ve become more mindful of how our goods travel, and people have evolving preferences of personal and professional mobility.  As resources become more expensive and people choose to live in more dense, walkable communities, where are we as a region and a nation going to direct our transportation system?

The film itself offers no easy or clear-cut solutions for American transportation infrastructure, especially for cities such as Detroit, St. Louis, Memphis, and others that have lower levels of density and waning concentrations of industry.  What the film does is inspire those who care passionately about the role of transportation in shaping our economic and social lives to call for strong leadership, at all levels, to look beyond our present system towards long-term vision and investment, as well as embracing multiple modes of transportation use and ownership.  To develop our own transcontinental railroad or interstate system highway systems for our next generations.  To look for long-term transportation models that will shape America for the next century – models that are effective, innovative and sustainable given our economic and environmental climate.

Obviously, that’s quite a lot to ask, but people are increasingly passionate about it.  Think that transportation policy discussions aren’t your typical draw for the Hulu set?  You’re not alone.  Mr. Woolf told the audience on Monday he appreciated the number of people, especially young people, willing to come out and watch a documentary on infrastructure.  In response, one enthusiastic young viewer yelled, “Infrastructure is sexy!”  Maybe that’s the kind of attitude and optimism that this country’s leadership should recognize, and embrace, moving forward.

To watch Beyond the Motor City, visit Blueprint America.

5 thoughts on ““Beyond the Motor City” Documentary Delivers Lessons for St. Louis and Entire U.S.”