Today, Metro representatives and members of the community gathered to celebrate 50 years of MetroBus service to the Bi-State region. 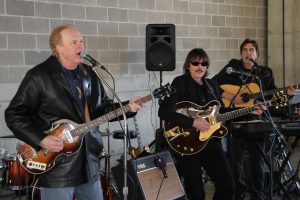 ‘Ticket to the Beatles’

The 50th anniversary celebration kicked off at 10:10 a.m. at the Central West End MetroBus Center with 60’s tunes played by the band ‘Ticket to the Beatles.’ MetroBus passengers were delighted by the performance and many came over to listen. Customers were swaying and singing along all in the spirit of MetroBus’ beginning in the 1960’s.

On April 1, 1963 at 12:01 a.m., the Bi-State Development Agency officially acquired the St. Louis region’s 15 privately-owned transit companies and began operation of a single, coordinated transit system for the region. Since then, MetroBus has evolved into an award-winning system which plays a vital role in connecting area commuters to jobs, schools, medical appointments, sporting events and other important destinations. 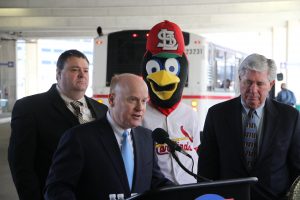 The event was designed to recognize the impact and importance of MetroBus on the St. Louis region over the last half-century, while also celebrating the many successes the system has experienced throughout its history.

Bi-State Development Agency/Metro (BSDA/Metro) President and CEO, John Nations welcomed Metro operators and other Metro employees, customers, media, and community members to the celebration. “It’s hard to believe that 50 years have gone by since Bi-State Development Agency first began operating 15 separate, struggling transit companies as a single entity, at the request of St. Louis civic and business leaders,” said Nations. “This anniversary represents a significant milestone in our organization’s history, and is another example of how we have been providing regional solutions to regional challenges since 1950.” 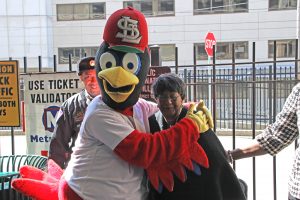 David Dietzel, Chairman, Bi-State Development Agency/Metro Board of Commissioner, helped welcome some very special guests to the event: Gerhard Petzall, an attorney who helped craft the original contract that created the BSDA bus transit system; former St. Louis Post-Dispatch reporter Phil Sutin, who wrote a series of stories in 1973 surrounding BSDA’s operation of the region’s bus system, and 97-year-old Elloise Reese who is an original MetroBus rider and has ridden the bus her entire life. 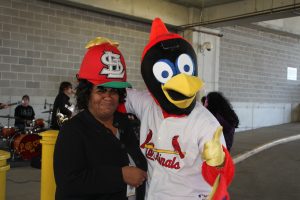 Fredbird made a special appearance at the event, drawing the grand prize winner of four tickets to the April 8 St. Louis Cardinals home opener. The winner was Kim Prophete. Congratulations, Kim!

Key accomplishments the agency has achieved leading up to this milestone include Bi-State’s 1977 purchase of 171 new buses featuring “kneeling” action designed to make boarding easier for the elderly and people with disabilities; a 1980s garage replacement and expansion program designed to modernize transit facilities; efforts to provide transportation services for thousands of athletes and spectators during their stay in St. Louis during the U.S. Olympic festival in 1994; and recognition in 1997 by the American Public Transit Association as the best large transit system in North America.

Further fueling the agency’s more recent success is the transition MetroBus made in the 2000’s to a ‘Spoke and Hub’ system for more efficient bus connections. Today, MetroBus consists of a fleet of 374 vehicles serving 75 routes across the St. Louis area, carrying 29,120,470 riders annually. 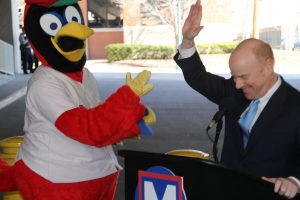 “As we pause today to reflect on the history of our agency, we do so with the understanding that no matter how far we’ve come, we must remain focused on the future and how we can continue to meet the needs of the region,” Nations said. “Whether it’s continuing to expand service and increase frequency on our routes, hiring and training new operators or incorporating state-of-the-art technologies, we are committed to doing all that we can to ensure that the next 50 years are ones we will look back on with pride.”