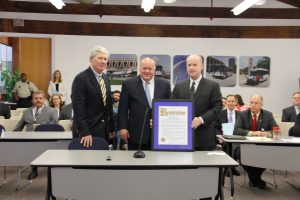 At today’s Board meeting, the Bi-State Development Agency (BSDA) Board of Commissioners recognized Commissioner Hugh Scott III for his decade of service to the Agency.

“We are extremely grateful to Commissioner Scott for all of his contributions and special dedication to this Agency and the region over the years,” said John Nations, President and CEO of the Bi-State Development Agency. “With his leadership and support, we’ve been able to position the Agency as a key driver of economic growth for the region, as well as a provider of world-class transportation for our communities.”

As a commissioner, Scott was a tireless advocate for regional economic development and public transportation. In August 2006, he led the Agency through a major expansion of the Metro transit system as Chairman of the BSDA Board with the opening of the Cross County MetroLink Extension. This addition to the MetroLink alignment created nine new stations along eight miles of rail serving the communities of Clayton, University City, Richmond Heights, Maplewood, Shrewsbury, Brentwood and the City of St. Louis. 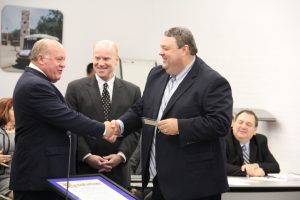 Scott is also a regular user of the Metro transit system and has been riding public transit throughout his life. During his youth, he relied on the city’s streetcar lines and buses to move about the region.

“I can remember countless times, I’d say to my mother, ‘Can you drive me down to Washington U? Can you drive me down to the Central West End?’  And she would give me four quarters and she’d say, ‘There’s a streetcar at the bottom of the hill and if you just stand there, eventually one will come and it’ll take you where you need to go,”’ Scott said.

Scott was appointed to the BSDA Board of Commissioners by Missouri Governor Matt Blunt in April 2005. His term ended earlier this year.