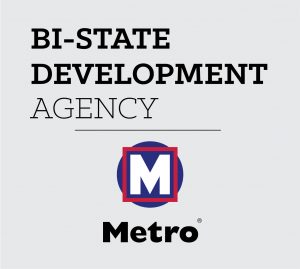 Following an extensive search, the Bi-State Development Agency (BSDA) is excited to announce the relocation of its headquarters to the Metropolitan Square Building at 211 North Broadway in downtown St. Louis. The move is planned for summer 2015.

“Our two and a half year search and series of evaluations made it clear that a more efficient use of our limited funds is to move to this new location. During our evaluation, we also realized that we can operate with less space than we currently occupy,” said John Nations, Bi-State Development Agency’s President and CEO.

After considering a range of options from buying, building or leasing, the agency has negotiated a favorable, full-service lease rate at Metropolitan Square in the former HOK space. The space requires a minimum amount of renovation and is an overall financial savings over the agency’s current location. “The leasing agent, Jones Lang LaSalle, should be commended for working with a public agency to make the move feasible,” Nations added.

The new location, with its 73,000 square feet, offers a much more efficient and cost effective use of space and taxpayer funds. It provides more transit accessibility for employees and visitors with both the 8th & Pine and Convention Center MetroLink Stations within walking distance and seven MetroBus routes as well as Madison County Transit just outside the building. The agency’s current location is near the Laclede’s Landing MetroLink Station, and has no direct access to MetroBus.

Recently the national publication, Mass Transit magazine, highlighted Metro as one of the most efficient public transit systems in the country. St. Louis Downtown Airport has grown to provide a regional economic impact of approximately $584 million. “The Bi-State Development Agency is always asking its enterprises, like transit and the airport, if there is a better way to do things. This headquarters relocation is another product of that management philosophy,” said Nations.

“This is a smart move for both taxpayers and the Bi-State Development Agency,” said St. Louis Mayor Francis Slay. “I am delighted that the headquarters will remain on the border of the two state populations it serves.”

“Location is everything and the timing is right for Bi-State Development Agency to take advantage of the historically low lease rates in the heart of Downtown. This prudent move allows them to focus on the future of the bi-state region, while freeing up the largest historic building in Laclede’s Landing for commercial or residential redevelopment.”

“In our search, we were very serious about our responsibility to the taxpayer to be fiscally responsible and maximize their investment,” said Nations. “Finding space that improves our effectiveness and saves money at the same time is a good deal for everyone.”

When the 707 N. 1st Street location is vacated, the Agency will make the building available to the market. “We look forward to working with Bi-State Development Agency to develop their property into a residential space,” says John Clark, President of the Laclede’s Landing Community Improvement District. Early marketplace indications are that Laclede’s Landing and the building may prove to be prime locations for loft condo or loft apartment living.