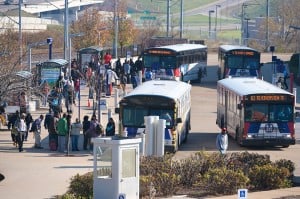 Metro workers are represented by the Amalgamated Transit Union (ATU) Local 788. The Bi-State Development Agency’s Board of Commissioners voted in favor of the same agreements on Sept. 19.

“We are pleased we have new contracts in place with our employees,” said John Nations, the Agency’s President & CEO.

One agreement covers the MetroBus and MetroLink operators, mechanics, electromechanics, and maintenance employees. The second contract covers clerical employees. They both expire on Dec. 31, 2017 and include pay raises for about 1,400 employees. Both contracts are retroactive to July 1, 2014.

Pension benefits remain unchanged for current, future and retired employees. However, because pension benefits have been a key issue during these long negotiations, both the agency and the union have agreed to revisit portions of the pension plan in the future.  The previous union contracts expired on June 30, 2009 and were followed with extensions.

During negotiations, ATU Local 788 accused Metro of trying to divide the workforce.

“That simply was not true,” Nations said.  “We negotiated in good faith and never intended to offend anyone, or to disrupt or divide the union leadership or our employees.  All of us at the Bi-State Development Agency are committed to serving the citizens of the region, and I applaud our employees for the work they do.  We are also committed to ensuring that our employees work in an atmosphere of respect.  We put one of the nation’s best transit service products on the street, and we are committed to being one of the best workplaces in transit.”