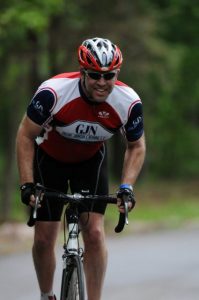 Droney at the 2011 Vino Fondo, a ‘timed ride’ through the hills of Missouri wine country.

We celebrate National Bike to Work Day — tomorrow, May 17 — with a look at bike and transit super commuter Robert Droney. Droney, 45, is an attorney who works three blocks from the Busch Stadium MetroLink Station. From his home in Ballwin, he often commutes by bicycle — 26 miles each way. Sometimes he rides every day. Sometimes twice a day.

My back started ‘phantom aching’ just interviewing this man.

The beauty of Droney’s bike-oriented lifestyle, though, is that whenever he wants an alternative, Metro Transit is always nearby. In his case, the 58X Twin Oaks Express on MetroBus is his primary option to and from work. On other days when he may not have as much time to ride 26 miles, he’ll hop on the MetroLink Blue Line to the Richmond Heights Station and bike home from there — some 17 miles. 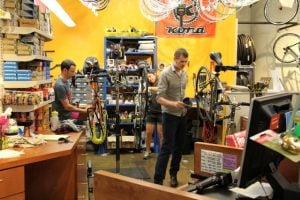 Technicians at work at Urban Shark and the Downtown Bicycle Station.

“As far as consistency goes, it has only been in times of significant weather events that I have ever had any problem with the bus being late,” said Droney, who is a member of the two-year-old Downtown Bicycle Station and uses it to shower and park his bike each day. “I’m absolutely amazed at Metro’s adherence to their time schedules.”

Though Droney’s bike commute is on the extreme end of the spectrum — he is, after all, a former triathlete and competitive cyclist — he insists that adopting bike and transit commuting isn’t as difficult as some might think. 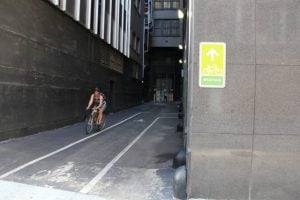 “It’s a way to use your commute time for exercise,” said Droney, who started cycling as a child and never gave it up. “It takes me one hour and 45 minutes to bike home from downtown. If I drive, it’s 35 minutes, best-case scenario. If I have to take a separate trip to the gym to work out and shower, I may not be home until after 8 (if I drive).”By cycling, Droney is home at 6:45 p.m. – or earlier if he mixes in transit – and his exercising is done (and then some.)

“The biggest thing is planning,” said Droney, a military veteran and graduate of UC Irvine and Washington University School of Law. “I have extra clothes at work and my employer is accommodating as well.” 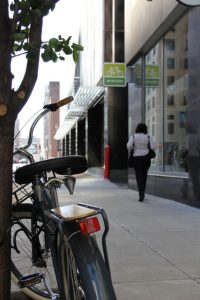 Though Droney has impeccable iron-man credentials, he does have his limits.

“I don’t commute in winter anymore,” he said. “Back when I was more avid, I would ride when it got down to 25 degrees. Now, it’s not so much fun putting on all that extra clothing. I’ll get out for my health, but I mainly bike commute from May to October.”

His advice to less dedicated cyclists thinking about biking to work? Give it try. Blend in some public transit and you could be pleasantly surprised by the results – on several levels.

Trailnet and the Great Rivers Greenway are inviting area cyclists of all experience levels to join them for free bagels, coffee, and camaraderie from 6:30 a.m. to 9 a.m. tomorrow at 10 locations in St. Louis City and County. St. Louis Mayor Francis Slay will issue an official Bike to Work Day Proclamation at 7:30 a.m. at the Downtown Bicycle Station.

For a full listing of Bike to Work Day stations, and for more information on National Bike Month happenings, visit www.trailnet.org/events/bike-month.

– Locker rooms and showers with free soap and shampoo

– 10% off repair and retail items at Urban Shark