Bus “Bridge” Shuttles For MetroLink Next Three Weekends in March

This month, two area bridge construction projects will impact MetroLink services and unfortunately that translates into three upcoming weekends of altered service to make sure that passengers and transit vehicles stay safe.  During bus bridges, Metro personnel will be on site to guide passengers, and rider alerts will be posted in MetroLink train cars. 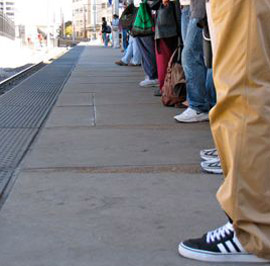 Time: Beginning of service (approximately 4:30 a.m.) until noon.  The normal Sunday schedule will resume at noon.

Details
Both Red and Blue Line service will operate regular schedules to and from the CWE MetroLink Station and the Union Station MetroLink Station.
During the adjusted service, customers should expect 15-20 minute delays to complete the trip.
Passengers can board eastbound at Union Station (Clark & 18th) next to the MetroLink steps.

Passengers who want to access areas around the Grand MetroLink Station can board the #70 Grand North or Southbound at Union Station near the bus shuttles. Look for posted signage.