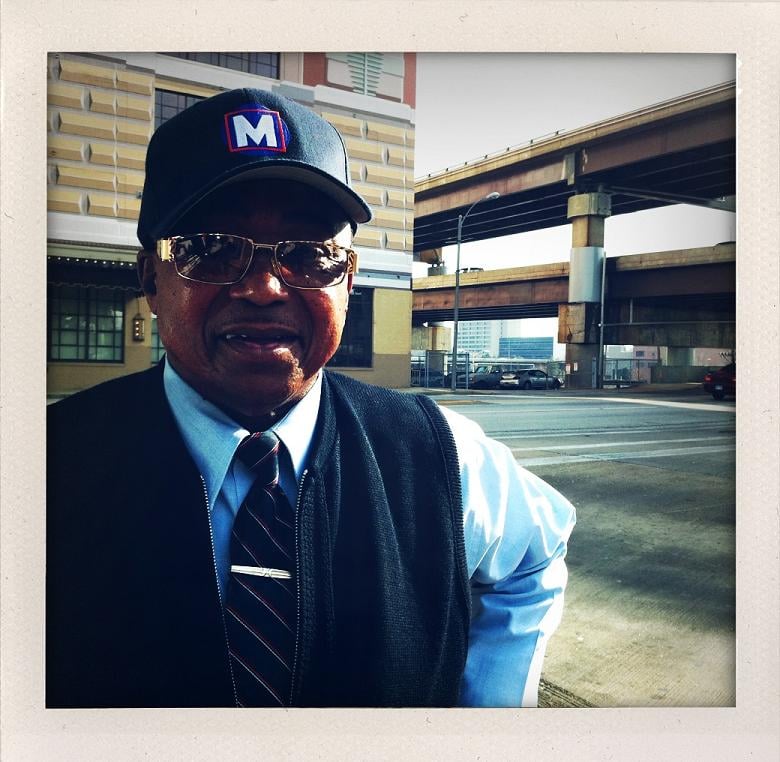 Isaac "Ike" Sanders in the intersection where he stopped the car.

MetroBus Operator Isaac “Ike” Sanders is a movie fanatic.  He’s especially fond of action movies, which may have come in handy last Friday when he jumped out of his #94 Page MetroBus and stopped a driverless car from entering traffic.  “I just thought to myself, ‘Somebody needs to stop that car.  People will get hurt,” said Sanders.  That somebody turned out to be him.

Police cars were in fast pursuit December 3rd of a car heading eastbound on Interstate 64 when they exited at 14th Street.  The car lost control getting off the ramp, and their car crashed into another one parked near the Sheraton Hotel.  The two men inside the pursued car continued on foot, but left the car in drive, heading northbound on 14th Street toward the Spruce intersection.

“That intersection is one of the busiest in downtown, and the car was rolling downhill.  I worried that people could get hurt,” recalled Sanders.  He said aloud that someone should stop the car, but when no one made the move, Sanders told his passengers what he was doing, and jumped out of his #94 Page bus parked near at the Civic Center Transit Center.  Sanders ran up to the moving car, jumped inside, and pulled the car over and gave the keys to the police at the scene.  According to the article in the St. Louis American, the passengers inside welcomed him back as a hero.

Born in East St. Louis, Sanders has lived in Cahokia for the past 14 years.  He’s a big fan of bowling and of course, movies.  “I loved Avatar, and Scarface.  On Golden Pond was really moving.”  He has been married for 22 years to Brenda Sanders, and they have five children, one of whom has passed away.  “Marque was a great athlete.  She was the first African-American girl to win the state cross-country finals.  She died of a congenital heart defect.”  In addition to his four grown children, Sanders has 13 grandchildren.  “I get scared around Christmas time,” he laughs.  “So many presents to buy!”

Sanders has been a MetroBus operator since 1977, except for a short stint as a supervisor (“I came back to driving.  I preferred it that way”).  A man with a laid-back demeanor and pride in his stylish dress, Sanders says he enjoys driving the bus.  “I can drive any route in the system.  I’m a very social person, I think that’s why I don’t have many problems.  I can work every run.”

Today Sanders’ bus is stuffed with copies of the St. Louis American that passengers have brought him throughout the day.  As we are speaking together, another friendly passenger comes up to the bus and hands him another copy.  When asked about his life motto, Sanders says, “Sometimes you have to grab life by the horns!”

And sometimes, you have to grab life by the wheel.  Thank you to Mr. Sanders for his heroism and his many years of service to Metro.