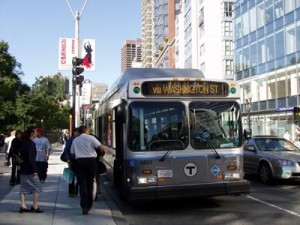 A New York Times article published a couple weeks ago has gotten people chatting about Bus Rapid Transit, or BRT. BRT consists of souped-up bus lines with some combination of larger buses (holding 60 people rather than 40), dedicated bus lanes, full stations with prepurchased tickets, and shorter waiting times. The bus lines are streamlined–fewer stops but more frequent service–occupying a happy medium between light rail or subways and conventional bus lines. BRT provides a cost effective way to increase service capacity and speed up travel time without substantially increasing cost of operation. And by building ridership and increasing the convenience of transit, BRT can pave the way for later improvements, like the extension of light rail lines.

While the article celebrates Bogota, Colombia’s BRT system and specifically highlights BRT’s potential in cities of the developing world, cities in the United States are also getting in on the action.  In the past, Metro has proposed BRT as an option for future service improvements. Remember last fall’s “St. Louis Region at a Crossroads”? Back then, Metro proposed BRT development if more funding became available.

There are two ways BRT could work in St. Louis, should we be in a position to expand service beyond what it was before this March. One way is to take a busy local route and convert it to BRT. The #70 Grand route, which is quite crowded, would be a great candidate for this. With a little investment in infrastructure, this busy route could run more frequently and stop less often, perhaps every four blocks or so. This scenario would shorten travel time while maintaining walkability, with no stop being more than two blocks away from existing stops. Plus it would be really useful; that route has a lot of good things: hospitals, a major university, restaurants and shops, theaters and museums, my favorite burrito place…the list goes on. It could be a great north-south corridor connector with connections to other bus routes and to MetroLink.

The second BRT option would function a lot like the express route service (some of which we’re restoring in two scant weeks!), except that it would run much more frequently and all day long. This would involve running buses on the interstate to connect BRT stations at Park and Ride lots to places not currently reached by light rail.

Although I just started my internship at Metro in June, I must admit that I’ve been a huge transit nerd for a long time. Metro’s BRT talk last fall was wicked exciting to me, so when I found myself in Boston this spring, I dragged my mom along to try out their Silver Line. My verdict: it put the “fun” in “functional.” There was a nice place to sit, an LED sign told me exactly when the next bus was coming, and got me back to Boylston station to connect with the subway in a speedy fashion. Bus rapid transit is definitely something I hope to see more of.

What do you think? Can BRT work for St. Louis? Would you ride it?