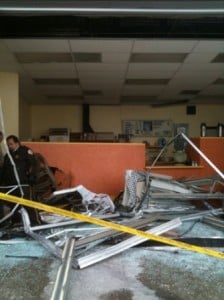 Thieves and vandals smashed and ruined the entire storefront of the cafe.

Early this morning, thieves smashed and ruined the entire front of the Earlean’s Cafe in East St. Louis, Illinois at the Emerson Park MetroLink Station.

What do you say to someone when their livelihood is smashed, strewn across the pavement before their eyes?

Metro – that is to say, the Bi-State Development Agency – lists “economic development” as among its mandates. Before light rail came onto the scene in St. Louis, there were the Arch parking garage, the riverboats, the Arch tram, and the St. Louis Downtown Airport. MetroLink itself is, as all light rail systems are supposed to be, a spur to economic development. So when the U.S. Economic Development Agency made a grant available to Metro in the 1990s, Metro – in partnership with the City of East St. Louis – took the opportunity to build a commercial building at the then-new Emerson Park MetroLink Station. The purpose of the grant is to help stimulate economic activity in an otherwise-economically depressed area.

The building has been a success so far. As of yesterday, the building was at capacity and contained an office for the St. Clair County Sheriff’s Department; Earlean’s Cafe, which has been managed by Earlean Malone for the last four years; and, more recently, the Cutting Edge Salon and JustBiz, a division of Justine Petersen. All three businesses employ several people, and all help stimulate activity at the MetroLink station. JustBiz provides, among other things, secured credit cards to help low-income people establish credit, and they also provide microloans that help entrepreneurs start small businesses – and hire more people. All of that economic activity benefits the city and the region as a whole.

This morning between 1 a.m. and 3 a.m. three unknown persons stole a church van and backed it through the front wall and into the cafe at Emerson Park. They were after the ATM inside. A security camera caught the entire incident.  But it seems that the thieves got away with almost nothing – the front of the ATM was damaged but there is no evidence that they got away with any money from it. Ms. Malone’s daughter told me the machine was nearly empty – it was almost time for it to be serviced. And Ms. Malone said the thieves took a bag of candy and a bag of chips.

All that destructive violence – all that damage – for a bag of chips and a small amount of cash, if any.

This is a story about a person, first – Earlean Malone and her hard work, carving out a niche for herself in the region’s busy eatery scene, bringing a service to a neighborhood without a lot of other restaurant options, and adding value to the transit system by providing a service to the traveling public. And it’s a story about economic activity – the activity spurred by the cafe, the income Ms. Malone makes and pays taxes on and spends on other goods and services, the income her employees make and pay taxes on, the sales taxes generated at the cafe that help pay for the infrastructure and services in East St. Louis.

Metro’s Maintenance of Way responded very quickly, contacting our Safety Department and working with the police – both City of East St. Louis Police and St. Clair County Sheriffs – to secure the crime scene and give the police the best chance to catch the criminals. We brought over a structural engineer this morning to inspect the building, once the police were done, to be sure the building was safe before sending our own people in to clean up the mess. This is Metro’s building, so Metro is responsible for replacing the wall and fixing the busted water pipe that was damaged when the van crashed through the wall. The building will be secured before the day is over, and Ms. Malone will be able to re-open as soon as it is safe – and clean – for her to do so.

So what do you say when confronted with this kind of destruction, and a tenant who is overwhelmed with the stress, and anger, and worry, and frustration of it all? All I could do was give her a hug, make sure that she’s in touch with her insurance company, and reassure her that Metro will act as quickly as possible to repair the damage so she can her business back on track.

I left her at the scene, still surveying the damage in disbelief with her daughter by her side. What does she want to do? Reopen as quickly as possible – and find the guys who did this.

2 thoughts on “Cafe at the Emerson Park MetroLink Station”