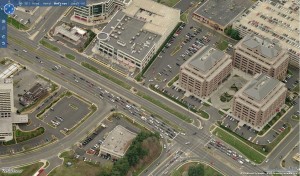 One of the toughest challenges facing public transit agencies is designing a system that works well in lower-density areas outside of traditional urban centers. Suburban and ex-urban sprawl pose a serious problem for alternative modes of transportation–for bikers, walkers, and transit riders–in cities all across the country, including our own dear St. Louis.

Time magazine published an interesting article last week about Tyson’s Corner, Virginia, one of the nation’s most notorious and massive examples of sprawl, located in the D.C. area. Right now, this ‘exurb’ consists mostly of shopping malls, big box stores, and office complexes, and has very little housing. The article details a new development plan inspired by the proposed addition of a light rail line through the area, with four stops proposed for Tyson Corner. The development, all sponsored by private developers rather than a local government, calls for the addition of thousands of living units and the institution of a street grid in an area that now is connected primarily by parking lot. It’s Transit-Oriented Development on a massive scale, with the impetus for the project coming mainly from the addition of the light rail stops and from a desire to reduce traffic.

It’s an interesting idea and, as far as I am aware, unprecedented in its scale. What do you think? Will this work or even happen? Could transit-oriented development of this type transform St. Louis in the future? I’m interested to hear your thoughts.