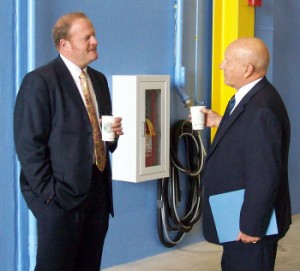 Yesterday, Metro’s Engineering Department celebrated the successful completion of the new paint booth facility that I mentioned previously. A small ribbon-cutting ceremony was held yesterday morning out at the Illinois MetroLink Yard facility in East St. Louis, where the paint booth was built.

The new paint booth facility was constructed by Plocher Construction and, thanks to the project team’s hard work, the project was completed ahead of schedule and under budget. The new facility has two parts: a “prep” area where the vehicles are cleaned and prepared for painting, and the paint booth itself, which has a massive filtered ventilation system and a whole lot of lighting. There’s also a smaller shop area where small parts can be prepped and painted as well. The setup includes a “dust collection system” (i.e. vacuum setup) and an exhaust system that keep bad particles from escaping into the air. 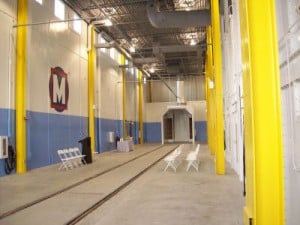 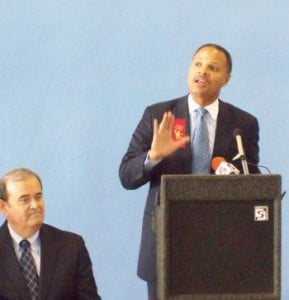 Why is this a big deal? This project not only came in under budget and ahead of time, but it is also helping “green” our operations. Previously, any train car painting was done at our Missouri MetroLink yard facilities, but the painting facility there was make-shift, the environmental controls were not as sound, and the process took longer and produced an inferior quality paint job. The vehicles that will be maintained at this facility travel an average of  500 miles each day, and many of the cars in the system have been in service since the 1990s. It’s important to keep them clean and looking nice. I’ll bet you’ve never seen a “tagged” MetroLink car; and hopefully you never will.

So many people are involved in planning, funding, designing and building a project like this that we actually drew quite a crowd at the event. It’s exciting to see so many elected officials who are enthusiastic supporters of transit and the economic opportunity it brings. And it’s nice to take even just one hour to celebrate an accomplishment, thank those who made it possible, and let people have a look at what they’ve brought to fruition.