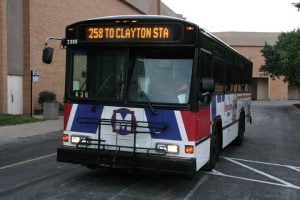 The MetroBus #258 Clayton-Chesterfield route will be temporarily rerouted for four months due to bridge reconstruction.

On Monday, March 31, the MetroBus #258 Clayton-Chesterfield route will be temporarily rerouted for four months due to the reconstruction of the Chesterfield Parkway West Bridge over Interstate 64.

The Missouri Department of Transportation will close the Chesterfield Parkway West bridge over Interstate 64 at midnight April 1 to make way for a new, expanded bridge.

The MetroBus #258 Clayton-Chesterfield route will still provide service to the Clayton MetroLink Station and the Ballas MetroBus Transfer Center, but rerouting and schedule changes are necessary west of Chesterfield City Hall.

The new $4.2 million bridge is expected to be completed by fall 2014 and include a total of eight lanes and eight-foot sidewalks on both sides of the bridge.

The bridge is congested during rush hour and has inadequate turning lanes, according to MoDOT. The bridge also has a vertical clearance issue.  International global life and health reinsurance company RGA is building its new headquarters at the north end of the bridge, bringing 300 new jobs to the interchange.

The MetroBus reroute schedule and more detailed reroute information can be found in the Rider Alert section. Customer service representatives are available from 7:30 a.m. to 4:30 p.m. Monday through Friday by calling 314-982-1406 or 618-271-7879.