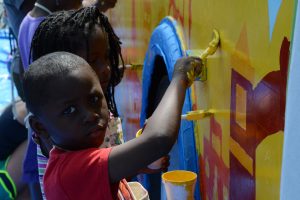 Metro’s first articulated buses, the newest and largest additions to the MetroBus fleet, will begin operating on the streets of Grand Boulevard next week.

To celebrate this new kind of public transit vehicle coming to St. Louis, Metro transit invited the community to help paint murals on one of the 60-foot buses on a parking lot in the South Grand Business District near Grand and Hartford.

It only took about 90 minutes Saturday for volunteers of all ages from around the Bi-State area to transform the 60-foot bus into a gigantic work of art. The Firecracker Press, a local graphic design studio and letterpress print shop, designed the two murals which were painted on the bus. The designs featured numerous landmarks from one end of Grand Boulevard to the other, including the Grand Water Tower, Fox Theatre, Powell Hall and Tower Grove Park. 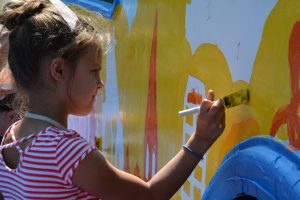 Greta was one of the first to arrive Saturday to paint the articulated bus. Although she said she has painted a lot at school, painting a bus came with its own unique challenges.

“It’s sort of hard cause it isn’t flat on the ground and you’re painting it upright,” she said.

Her favorite color to paint on the bus was blue. She said she will be excited to see the bus she helped paint drive up and down Grand Boulevard. She is also looking forward to riding on the bus.

“I rode one in Chicago and I liked them,” she said. “When you ride in them and you’re on the part where it bends, it gets really bumpy.”

Some frequent riders of the #70 Grand MetroBus route were also among those who came out to help paint the massive vehicle. Some of them said the articulated buses will help with the overcrowding on the #70 Grand Line. They mentioned the 40-foot buses have actually has passed them by because they were already filled. 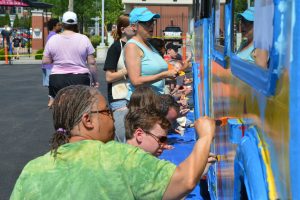 Metro transit has purchased a total of 15 used articulated buses to address the overcrowding issues on the #70 Grand Line, which records higher ridership than any other MetroBus route with approximately 9,000 boardings every week day.

The articulated buses which are made of two sections linked by a pivoting joint, are longer than the 40-foot buses in service today on the #70 Grand Line, and can accommodate 25 percent more passengers. Each articulated bus has 54 seats and more room for standing passengers. The buses are being rebuilt so everything from the wiring to the engines is new. Only the shell is old. After the buses are completely rebuilt and prepared for service, they will begin operating on Grand Boulevard. By the end of the year, all 15 articulated buses will be in service on the #70 Grand Line.

The first few articulated buses go into service next Monday, June 9. At a new conference this Friday at the Grand MetroLink Station, the public will get to check out the new buses, inside and out, before they hit the streets on Monday.

3 thoughts on “Community Paints Murals on a Really Big Bus”