An effort to expand and enhance the Civic Center Transit Center in downtown St. Louis kicked off this morning with an official groundbreaking ceremony.

Representatives from the Federal Transit Administration and the City of St. Louis joined Metro to commemorate the beginning of construction. The project will expand the transit center to accommodate more buses and add new passenger amenities and features. Construction is scheduled to take up to 18 months to complete.

“Working closely with our transit partners in the City of St. Louis, we finalized plans to expand the Civic Center Transit Center, one of Metro’s busiest transit hubs,” said John Nations, President and CEO of Bi-State Development. “This site will be upgraded and enhanced to provide safer and more efficient transit service, and to provide our passengers with a superior transit experience, here in the heart of downtown St. Louis.”

Construction will expand the Civic Center Transit Center and triple the current number of bus bays, which will allow MetroBus passengers to connect with all of their bus routes inside the transit center and out of vehicular traffic on 14th Street. A new building will also be constructed on 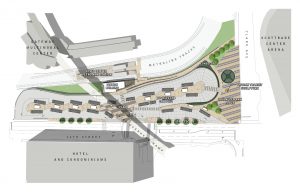 the site that will feature new passenger amenities, including public restrooms, an indoor waiting area, digital boards with MetroBus arrival times, a concession area and a Metro Public Safety substation.

“It is our duty to ensure that residents, workers, tourists and visitors can travel safely and efficiently throughout the bi-state region,” said Ray Friem, Executive Director of Metro Transit, “and that they enjoy the best possible transit system and experience we can provide.”

Metro successfully secured federal funding to rebuild the Civic Center Transit Center, and those funds will support 80 percent of the total project cost of $10.5 million. “The competition for federal transit dollars is intense,” said Mokhtee Ahmad, Regional Administrator for the Federal Transit Administration, Region VII. “Bi-State Development and Metro are to be commended for being so diligent and fiscally conscientious in maximizing federal transit funds to get taxpayers the highest return on their investment.”

“Making investments to improve and expand the Metro transit system is critical toward ensuring our region remains competitive on a global stage,” said Francis Slay, Mayor of St. Louis. “Because where Metro goes, economic growth follows.”

Arcturis is the project design firm and KCI Construction is the general contractor. The expanded Civic Center Transit Center is also designed to evolve as the future transportation needs of the region change. The transit center is designed to accommodate 40-foot buses, 60-foot articulated buses, electric buses, and will be able to serve as a terminal point for Bus Rapid Transit Service with very little modification.