Dump the Pump Day Can Be Everyday in St. Louis

June 17 began as a windy, rainy morning in St. Louis for National Dump the Pump Day, and the weather only got worse as the morning commute continued. But for some people, it was just another adventure in dumping the pump in St. Louis. 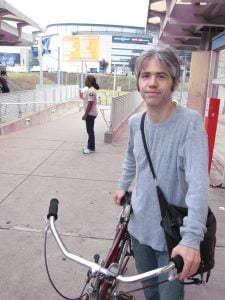 Anthony Michael Philip on his morning commute to work.

Four years ago, Anthony Michael Philip’s car met its demise in a “random act of vandalism.”  He decided not to replace it and instead to get around through transit and biking.  “I’ve always loved bicycling. It’s been part of my whole life.  But I live downtown and work in south St. Louis City.  [After his car died] I woke up and thought, ‘What am I gonna do?’ So, I hopped on my bike and rode to work and haven’t gotten a car since.”  I asked him how he finds getting around in St. Louis without a car and he replied, “Piece of cake. Between public transit and my bike, I can get everywhere I want to go.”

When I asked him if he had any advice for people looking to give up one or more of their cars, he said, “Yeah, don’t wait for someone to blow up your car to do it.  There’s no better reason to do it than just because.  It’s good for you and its a great way to get rid of stress.  By the time I get home, I’m ready for my evening.”

Citizens for Modern Transit’s Tom Shrout joined us at Civic Center MetroLink Station and explained that his family went from a two-car family to a one-car family seven or eight years ago.  His favorite perk is using the money saved for other pursuits, especially travel. “With the money we save, we like to go to fun places like Paris, London, Madrid. Those were places we couldn’t go if we were spending money on an extra car.”

There are no shortages of these stories in St. Louis.  Sometimes I hear, “What? Carless in St. Louis?” But people are doing it in our region all of the time, by choice or necessity.  If you have embraced more walking, biking and taking transit in your life, tell your friends, family and coworkers about the benefits and realistic challenges.  When someone is thinking about trying something new, it helps to get encouragement from people who are already doing it. 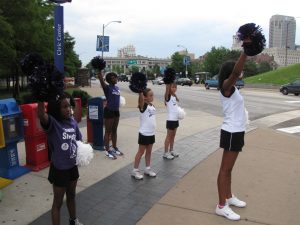 Thank you to everyone who participated in National Dump the Pump Day, especially considering the blustery, rainy weather.  Metro employee Ambassadors were out on the MetroLink alignment and bus transfer centers greeting customers and handing out entry forms for our Dump the Pump giveaway.  You can still register until June 28 to win prizes and alternative transportation gear from Metro, Trailnet, Citizens for Modern Transit, and Great Rivers Greenway.

Have a fun weekend, St. Louis, and however you go, safe travels!

2 thoughts on “Dump the Pump Day Can Be Everyday in St. Louis”