Eads Bridge and STL Highlighted on Travel Channel’s Off Limits 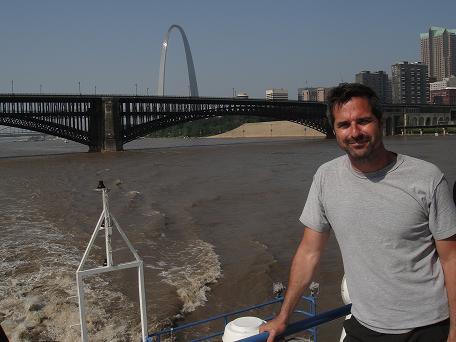 The Eads Bridge, the City of St. Louis and Metro Transit will be featured on a program airing at 7 p.m. tonight, November 3, on the Travel Channel. In his show “Off Limits”, host Don Wildman takes his viewers behind the scenes and inside locations and landmarks around the country they would never be allowed to explore.

This summer, Wildman, and a crew from Authentic Entertainment experienced the historic Eads Bridge and the view may make some people a little queasy. After completing a training class, Wildman hopped off MetroLink at the Arch-Laclede’s Landing Station and met with Eric Fields, Senior Project Manager in Engineering at Metro. Fields shared the history of the Eads Bridge and the role the riverfront played in the development of St. Louis. Wildman put on a safety harness and climbed out on the Eads Bridge while dangling over the Mississippi River with a bridge inspector. Wildman was excited and amazed at what he learned as he dug into the rich history of the Eads Bridge which is co-owned by Metro and the City of St. Louis. (Metro operates the rail deck and the City of St. Louis operates the vehicle deck.)

Wildman’s adventure on the Eads Bridge is one segment of tomorrow night’s episode of “Off Limits”. He also explores a labyrinth of beer caves in St. Louis tonight at 7 p.m. on the Travel Channel.