If you’re familiar with downtown St. Louis, you’re familiar with the bridge that was completed in 1874 by James Eads. Metro shares ownership of the Eads Bridge with the City of St. Louis. In 2003, the City rehabbed the road deck – its portion of the bridge – but MetroLink’s track portion hasn’t been rehabbed since MetroLink was first constructed. Metro owns all the bridge structure below the vehicle deck, and it hasn’t been rehabbed since the 1920s. 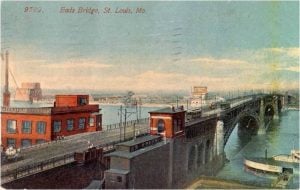 Our engineers keep a close eye on the bridge structure. They get geared up in these elaborate safety harnesses – and, since they will be dangling over the Mississippi River, they also put on orange floatation vests – and climb on the bridge structure to do a literally hands-on inspection.What they found is that some of the structure is, understandably, showing signs of age. Further, the bridge needs painting to protect it from future rust damage, and the MetroLink track system also needs repair. 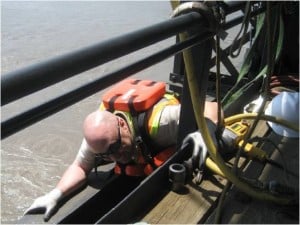 Our Project Manager, Eric, wearing his safety gear during a hands-on inspection.

Thanks to the ARRA (stimulus) bill, Metro has received a grant to do a complete rehabilitation of this important historic and iconic asset. Support steel that dates to the 1920s will be replaced, the entire superstructure will be sandblasted and painted, and the MetroLink track system will be upgraded, including rail, ties, and wire connections. To find out how all this will be done with minimal impact on the MetroLink customers, continue reading after the break.

The work on the Eads Bridge rehab project is expected to take about two years. The best way to assure a quality rehab but maintain service is to perform the work on one track while still running both eastbound and westbound MetroLink trains on the other track. To do that, we’re going to build a new interlocking just west of the East Riverfront Station first. 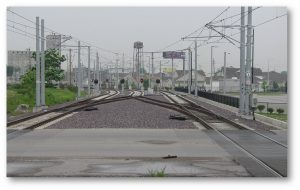 An interlocking allows the train to cross from one track to another.

An interlocking is just a crossover (with all the requisite signals, switches, etc.) that allows the train to switch from one track to the other. There’s already a crossover at Laclede’s Landing Station. Adding this crossover will allow MetroLink to run its normal schedule even with one track closed on the bridge. 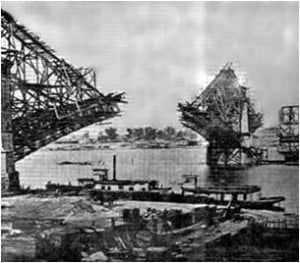 This photo shows one of the bridge spans under construction.

This project – repairing a bridge while suspended over the Mississippi River with a light rail system still running up on the bridge – will certainly present some challenges. Sandblasting will be particularly challenging, because you can’t just blast away at the rust and let it fall. We’ll have to catch every little piece of the abrasive “shot” used, as well as all the rusty flakes that come off, so they don’t fall into the river and contaminate it. But if James Eads, using 1870s technology, could build a bridge so well that our Project Manager tells me the stones barely even show signs of deterioration or wear from the river (after 130+ years!), then Metro, using modern technology and safety measures, can figure out how to preserve this engineering masterpiece for years to come.