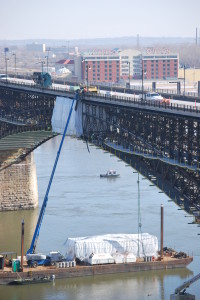 If you have been on Laclede’s Landing or taken MetroLink across the Eads Bridge lately, then you may have noticed a white cocoon-like tarp covering a small section of the bridge on the north side. It is called the blast containment area and crews installed it as part of the Eads Bridge rehabilitation project which includes blasting off old layers of paint and rust.

Metro is making sure that our contractors and subcontractors are following all regulations and are taking all the appropriate measures to keep the environment, the community, our passengers and bridge workers safe from exposure to any harmful substances which may be contained in the paint chips, dust and debris being removed from the bridge structure.

The blast containment section is the actual work area where the old paint and rust are being removed and where the infrastructure will be primed and new coats of paint will be applied. It is an air tight enclosure made of impermeable canvas tarps fixed to cable rigging attached to the main structure, or directly to the structure itself.  The canvas forming the containment envelope is completely sealed at all structure interfaces.  Fresh air is continually pumped into the air tight containment envelope. 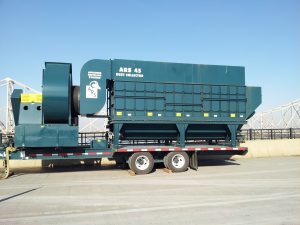 All the waste and dust generated during the blasting and paint removal have to be carefully contained and controlled so no dust or materials can escape into the air outside the blast containment or fall into the Mississippi River. Those blasted materials go through tubes into the secure dust collector which is also stationed directly above the operation on the top deck of the bridge.

Inspections are conducted daily on the blast containment area when it is in use.  If crews see any kind of leakage or containment problem, operations are shut down until the containment is repaired, secured and brought into compliance.

Federal regulations require that air samples be taken 24 hours a day using remote air monitors positioned in the southwest, northwest and southeast quadrants of the bridge project. The air samples were filtered and the particulate matter was analyzed for contaminants every day for the first five days of the operation. Since then, the process is being repeated every three days during the duration of the blasting project. The sample testing results are given to Metro for any required action. 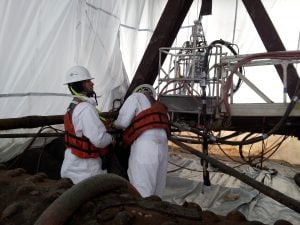 Pre-blast inspection inside of containment

There are also strict procedures that must be followed to ensure the men and women working in the blast containment area are safe and are not being exposed to harmful contaminants on the job.

Any workers performing duties that put them in contact with the dust or fumes generated from the removal or burning (torch cutting) of the existing layers of old bridge paint are required to undergo baseline medical examinations that include blood testing to monitor potential accumulation of heavy metals in the blood.  Workers are tested every two months after their initial medical exams.

As you might imagine, workers on the bridge in the blast containment area are also required to wear the appropriate OSHA approved protective equipment, such as respirators, protective body suits or full hoods, depending on their exposure level. 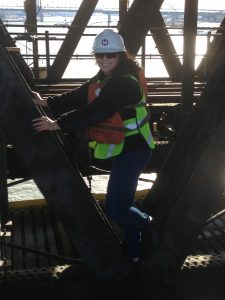 Before containment went up, our contractors took me on a tour of the Eads Bridge rehabilitation project. We walked along the MetroLink track and I got to see them removing a section of track. We also climbed through the bridge structure and onto the safe span. It was a little scary and windy, but the view was worth it.  Below you can see a video of us walking along side the bridge on the safe span. The small boat in the water floating around the bridge is a safety boat. It must be out on the water anytime workers are on the bridge.