The Bi-State Development Agency provided an update today on the status of the first comprehensive, full-scale rehabilitation of the truss and supporting superstructure of the historic Eads Bridge.

The $40.2 million project is needed to upgrade the bridge and preserve a critical piece of the region’s $1.8 billion transit infrastructure so it can continue to serve future generations. The project is 50 percent completed with the north side of the bridge structure refurbished. The focus of the work now shifts to the south side of this national landmark. 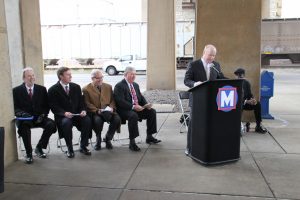 Completed in 1874, the Eads Bridge was the first steel structure bridge project in the United States and one of the first structures of any kind in the country to extensively use steel as a construction component. After well over a century of use, the structural rehabilitation underway is replacing support steel that dates to the bridge’s first years in service, with 1.2 million pounds of new steel installed during the first half of the project. Crews have completed the removal of the existing coating system by blasting off multiple layers of paint and rust in a completely contained environment to protect commuters, workers, air quality and the Mississippi River.

“They broke new ground when they began building this bridge almost a century and half ago, and we anticipated there would be unknowns as we addressed the rehabilitation of this unique, historic landmark,” noted John Nations, President and CEO of the Bi-State Development Agency/Metro. “The project remains on track to be completed in late 2015 or early 2016.”

One unknown was discovered when the analysis of the existing steel indicated the structure was made out of an unidentified alloy incorporating different percentages of the elements that make up the steel used in modern day projects, reinforcing just how experimental steel was as a new metal when the bridge was being constructed. However, the steel alloy used is very strong, and 95 percent of the original steel remains part of the rehabilitated bridge.

View before and after photos of the Eads Bridge rehabilitation project on our Flickr page. 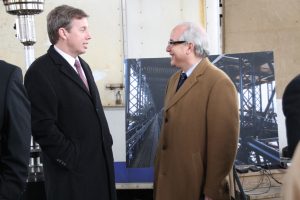 On the north side for the bridge, up to nine layers of old paint and rust were removed to the bare metal, then the stripped-down structure was primed with a rust inhibitor and topped with an anti-corrosion coating that will extend the life of the bridge another 50 years. The project team also completely replaced the structural flooring system, ties and rails that MetroLink uses, and replaced messenger and contact wire with a new overhead conductor rail — making Metro transit only the second public transit agency in the nation to employ this state-of-the-art equipment to improve the efficiency and reliability of its light rail system.

“The importance of the rehabilitation to preserve this critical piece of our transit system cannot be overstated,” Nations said. “Our MetroLink trains cross this bridge approximately 300 times each day.” 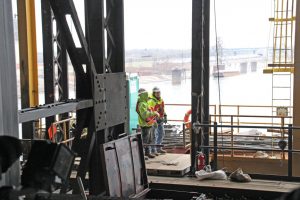 Both eastbound and westbound MetroLink trains have been shifted to the refurbished north side of the bridge while the crews get to work on rehabilitating the south side. As work moves forward, challenges encountered and already addressed should help to further streamline the project approach. The biggest challenges have come from the fact that renovations are being made to a 140-year-old structure, featuring a truly unique geometry in which the arch ribs and structural elements themselves are completely unique. Incorporating new structural elements into an old structure and making the right connections with all the lateral bracing going in different directions have proven to be complex.

“We now know where the complicated areas are and we’re better prepared to attack them a little differently to make sure we’re accommodating the lateral bracing through the new floor system,” noted Fred Bakarich, Interim Director of Engineering for Metro. “This allows for more efficient steel erection and subsequent mitigation of schedule impacts.” 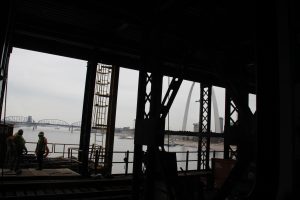 The project is largely funded through $37 million in federal support, with $25 million coming from ARRA (American Recovery and Reinvestment Act) funds. The City of St. Louis, which co-owns the bridge with Metro, contributed a $4.8 million federal grant toward completion of the project. The remaining costs are supported by local funds.

“Today this bridge is a magnificent bow that sits atop ribbons of regional transportation assets,” said Eddie Roth, Deputy Chief of Staff for St. Louis Mayor Francis Slay. “One hundred forty years since its opening, it continues to unite the St. Louis community socially and economically, and plays a part in connecting it to the world.”