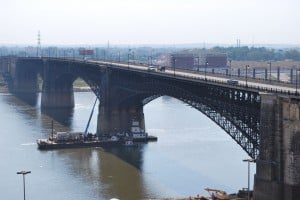 If you’ve been down on  the St. Louis Riverfront recently, you may have noticed a barge and man-lift working on the northwest side of the Eads Bridge. Yes, the bridge rehabilitation project is finally moving forward in a way that you can actually see for yourself!

In preparation for this project, Metro installed a new crossover at the East Riverfront Station, which will allow us to “single track” – run both eastbound and westbound trains on the same track – without interrupting the current time schedule. Single-tracking began earlier this year, but you probably did not even notice, thanks to the interlocking. Metro then started on track work, taking down the overhead wires (catenary system) which power the MetroLink trains for Track 1 or what you might call the westbound track. Off-site, the new structural steel floor system is being fabricated – it will replace the 138-year-old existing floor system supporting the tracks. 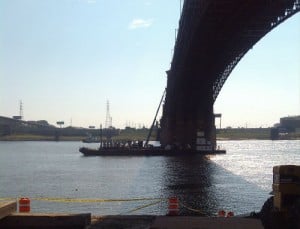 The barge is in place so workers can install the scaffolding, which will provide a platform for the workers. The scaffolding will also serve as the base for the containment system, which will be used to encase one small piece of the bridge at a time. The containment system will ensure that when the workers blast the iron and steel – removing the rust and the old paint – none of the particles will fall into and contaminate the river, which is very important environmentally. We expect that the scaffolding will be in place on the north side of the bridge – Track 1 – by the end of November. The scaffolding on the south side of the bridge will not be installed until all the work on the Track 1 side is completed, and Track 1 has been reopened so that Track 2 can then be shut down! 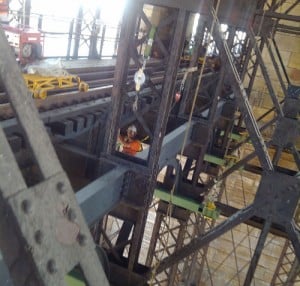 A worker installs scaffolding on the bridge.

While the scaffolding is going up, we will also be working on utilities. The bridge carries fiber cable from Illinois into Missouri, in addition to other MetroLink-related utilities. When all of that is done, we will demolish the track floor system and start working on  the structural steel.

The blasting and painting process will be done systematically. Twelve floor panels at a time will be encased, blasted, primed, and painted. The color will be the historic black. This process  is expected to be completed in late spring 2013, depending on the weather. Some days may be too cold to paint, which will affect the schedule. We have a 24-hour window, once the steel is blasted, before it has to be primed or else it will start rusting again and would need to be re-blasted. While crews work on the blasting & painting, they will also be inspecting all the steel, seeking anything worn, cracked, or otherwise in need of replacement. Such pieces will be cut out and custom-fabricated on site, installed, then primed and painted with the rest. 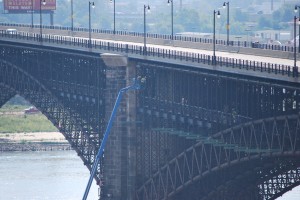 Once the painting and priming is done, the floor systems and track will be replaced. We expect that by the end of next year or early 2014, the Track 1 side will be done and the whole process will start over on Track 2. This is a lengthy process but it is going to be worth it for the region to preserve not only an important historic landmark, but a magnificently engineered bridge that was truly state-of-the-art and which serves as a vital link between Missouri and Illinois.

Infrastructure repairs and updates like the Eads Bridge rehabilitation project  are vitally important to protect the region’s investments and economic prosperity. We’ll keep you updated as the rehab progresses.