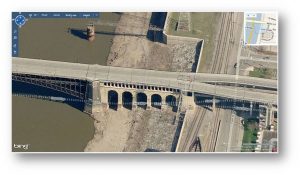 East Riverfront Arcade, which will soon see some changes.

The work on the historic Eads Bridge rehabilitation project is expected to take about three years total. The best way to assure a quality rehabilitation, but still maintain service levels, is to perform the work on one track while still running both eastbound and westbound MetroLink trains on the other track. To do that, Metro will first construct a new interlocking just west of the East Riverfront MetroLink Station, actually out on the bridge structure. 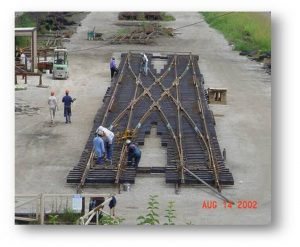 An Interlocking being assembled; it then gets dropped whole into place

An interlocking is essentially a rail crossover – it allows a train to cross from one track to another. Of course, all of the requisite switches and signals are a part of that package, too.

When used in conjunction with the existing crossover adjacent to the Arch-Laclede’s Landing MetroLink Station in Missouri, Metro will be able to operate MetroLink trains on the current (12 minute) headway without delay to customers, for the duration of the Eads Bridge project. Once work on one side of the bridge is complete, the work will move to the other side.

East Riverfront Station - those inside pillars will be removed and the interlocking dropped into place there.

At some point during this project, Metro will actually have to cut into the road deck of the Eads Bridge, in order to drop the fully-assembled crossover into place. The road deck of the bridge will be closed during this process, and Metro will close up the hole and repair the bridge deck once the crossover is in place. The contractor on the project is STV Inc.