By Matt Watkins
Return to Blog 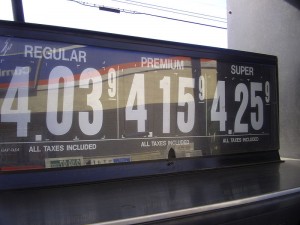 Every day American drivers spend about a billion dollars to fill up gas tanks. Prices have risen 51 days in a row. More bad news for car drivers – the Energy Information Administration of the Department of Energy has released a report predicting a sharp decline in world oil output in the near future. This is a radical change from the previous administration. Our government is finally admitting that peak oil is not so far away. Just a couple years ago, the EIA predicted that oil output in 2030 would be 107.2 million barrels a day – now it’s saying it’ll be more like 93.1 million. Liquid fuel consumption in the US is currently 18.9 million barrels a day. The EIA believes liquid fuel production won’t be able to keep up with future rising demand.

So what does all this mean for mass transit? We already know public transportation saves gas. The leverage effect of trains and buses reduces gasoline consumption by 4.2 billion barrels a year. We don’t have to keep using liquid fuels though. Buses can be powered with electricity or fuel cells. 10 European cities already have fuel cell bus fleets. Electrified trains can be powered with renewable energy, reducing the need for increasingly costly fossil fuels. The Interstate Traveler Company has a plan to build a hydrogen / solar powered train system in Michigan from Lansing to Detroit. Mass transit, paired with innovative renewable technologies, can help save money and the environment.

These technologies take money and years to implement. But you can do something this week to reduce gasoline consumption, save money, and help the environment. Today is Dump the Pump Day, a national event to promote public transit. I helped record a video on how other Metro riders plan to Dump the Pump which we will be posting shortly.  For more information on how you can Dump the Pump,check out Metro’s website.

View all posts by Matt Watkins