Extra Trains Scheduled for 2012 Komen St. Louis Race for the Cure; Take MetroLink or MetroBus to the Event! 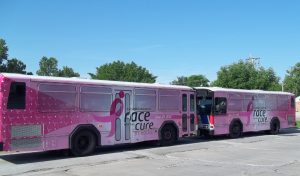 Metro Transit will operate extra service tomorrow morning, June 23, to accommodate the large crowd expected to attend the 2012 Susan G. Komen St. Louis Race for the Cure in downtown St. Louis. Last year, more than 64,000 women, men and children participated in the annual event and attendance is expected to be even higher this year.

Some Metro park-ride lots such as North Hanley, Shrewsbury and Fairview Heights will fill up quickly in the morning so customers are advised to leave early and consider using other park-ride lots like the Brentwood I-64 garage in Missouri, and parking at the Swansea or East Riverfront MetroLink Stations in Illinois.

Look for the Susan G. Komen MetroBuses at the Race for the Cure tomorrow. Good luck and happy racing and walking to Team Metro and all participants.