When and where was this week’s Flashback Friday photo taken? Well, I’ll tell ya! 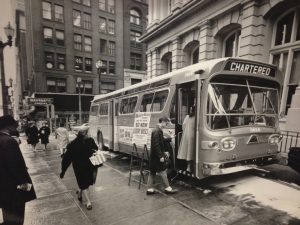 Photo Courtesy of the Museum of Transportation

According to the Museum of Transportation, the photo above is one of the new buses at a demonstration point in the heart of Downtown St. Louis. It was displayed right outside of the Old Courthouse.

Also in March 1964, the first Ford Mustang rolled off the assembly line at Ford Motor Company and Merv Griffin’s game show Jeopardy! debuted on NBC with Art Fleming as the host.