Did you guess what year our Flashback Friday photo was taken in?

If you guessed February 1948, you are right. This is just for fun so you don’t get a prize or but you do get the satisfaction of knowing you are correct! This week’s Flashback Friday was taken on February 21, 1948. 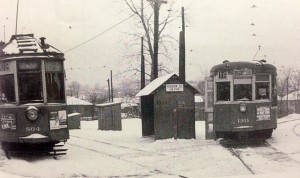 In this photo from Andrew Young’s Streets & Streetcars of St. Louis: A Sentimental Journey, we see Ferguson Junction.  The car on the left was running on the 02 Berkeley shuttle. The car on the right had come up from Ferguson and would have continued its trip to Wellston and Maplewood, according to Young. The photo was taken on the last day the Berkeley streetcar line ran.

Wait, it gets cooler! This next photograph, also from Streets & Streetcars of St. Louis, was taken a few minutes after the previous photo. 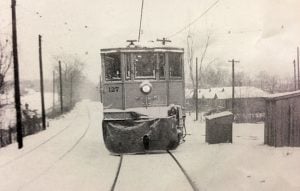 Young points out that you can see Snow Sweeper 127 on the Berkeley tracks just north of the junction.

Did you guess the right year the picture was taken?