Friday is a great day in and of itself. However, it is made even better by Flashback Friday! (If I do say so myself)

Did you correctly guess when and where this week’s Flashback Friday photo was taken? 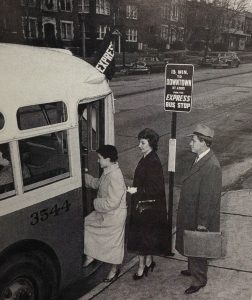 The picture above, courtesy of the Museum of Transportation, was taken in 1950 on Clayton Road, a little east of the Esquire Theater. (My neighborhood!) The photo shows three passengers boarding a city-bound Clayton express bus.