Were you able to guess when and where this week’s Flashback Friday photo was taken? 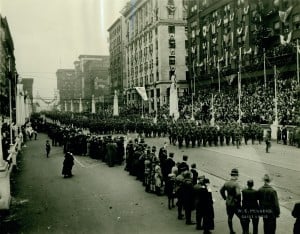 This photo provided by the  Missouri History Museum was taken on May 9, 1919, on Twelfth Street (now Tucker Boulevard). It shows a parade of the Army 138th Infantry marching down Twelfth Street past a court–of-honor in the reviewing stands.

According to an article written last year by Tim O’Neil in the St. Louis Post-Dispatch, the soldiers were  veterans of the infamous World War I battle in the Argonne Forest in France. “The 138th had paid dearly for the honor — of 3,500 men who signed up, 230 were killed in combat. Accidents and wounds increased the casualty rate to almost 50 percent. The survivors stepped off trains at the Wabash station near Forest Park and marched downtown in formation with rifles, packs and helmets.”

For more information about the 138th Infantry and its march in St. Louis in 1919, read the full Post-Dispatch article here. http://www.stltoday.com/news/local/metro/a-look-back-american-legion-s-founders-returning-veterans-crowd/article_1d89ae89-e95d-5434-8e83-1480d3125c0b.html