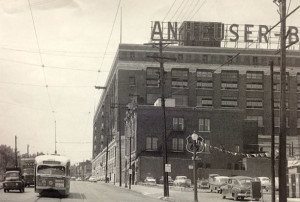 Flashback Friday is here to help you get ready for Mardi Gras. I already have my purple, green, and gold feathered headdress ready.

The Mardi Gras parade route starts at Busch Stadium and makes its way through Soulard to the Anheuser-Busch Brewery.

In this week’s Flashback Friday, we take a look back at South Broadway in 1956, right outside the brewery.
According to Andrew Young’s book Streets & Streetcars of St. Louis, this photo shows northbound Car 1784 about to cross the brewery-owned Manufacturer’s Railroad tracks on Dorcas Street. 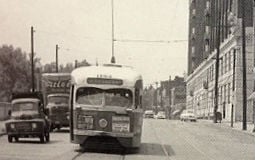 According to Anheuser-Busch records, a custom neon sign has been on top of the Bevo building for more than six decades. The large Anheuser-Busch sign shown in our Flashback Friday picture was replaced in 1979 with a Budweiser sign.

The intersection shown in this photograph will be filled with crowds, beads, and floats come this Saturday.

Everyone have a safe and fun Mardi Gras. Remember the easiest way get there is to take Metro’s Special Shuttle Service.