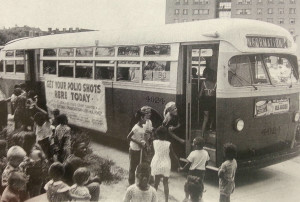 Photo courtesy of Museum of Transportation

This photo from the Museum of Transportation was taken in 1956 at the Pruitt-Igoe Complex. Pruitt–Igoe was a large urban housing project of 33 buildings on the Near North Side of St. Louis first occupied in 1954 and demolished between 1972 and 1975.

According to Andrew Young’s “St. Louis and its Streetcars,” the photo shows surplus bus 4042 apparently being used as a facility to administer Polio vaccines.