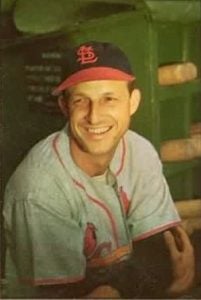 In this Flashback Friday, I would like to remember a St. Louis great. Stan Musial, who played his entire 22-year major league career (1941-63) for the Cardinals, died last week at his home in Ladue surrounded by his family at the age of 92.

Musial was the first player in Cardinals history to have his uniform number retired, and he was a first-ballot Hall of Fame selection in 1969, being named on 93 percent of the ballots.

Musial, who was born in Donora, Pennsylvania, signed with the Cardinals in 1938 and made his major league debut with the team in 1941.  Musial was a member of the Cardinals teams that won the World Series in 1942, 1944 and 1946.

The 1944 World Series Musial played in was a St. Louis battle. The St. Louis Cardinals and St. Louis Browns played at Sportsman’s Park. The series was referred to as the “Trolley Series,” “Streetcar Series,” or the “St. Louis Showdown.”

He missed the entire 1945 season to serve in the United States Navy during World War II.

According to Andrew Young’s book St. Louis and Its Streetcars, the photo below was taken in 1945. You can see Sportsman’s Park on North Grand Boulevard at the end of another ball game. While Musial did not play during this season, this view would have been common during his time as a Cardinal. 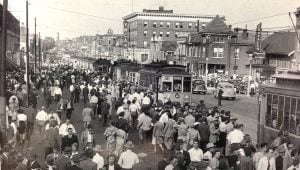 In the photo you can see a line of streetcars ready to take the baseball fans home after a summer game.