No need to jump to the left, or step to the right for this ‘Time Warp.’ It’s Flashback Friday time!

1945 was a historic year: The Battle of Iwo Jima, the death of Adolph Hitler, the end of World War II, and the Atomic bombs, just to name a few.

In this week’s photo, we get a glimpse of one of the good things going on in St. Louis that year. 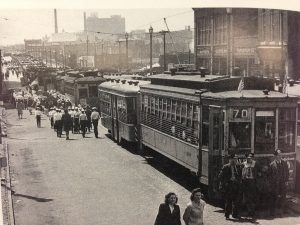 According to Andrew D. Young’s St. Louis and its Streetcars, this photo from the Museum of Transportation shows a city cleanup day. During the city cleanup days, school children were bused in from all areas to help. With charter buses unavailable during WWII, streetcars were used.

The photo was taken on April 20, 1945 and showed a line-up of streetcars on 14th Street, stretching from Clark Street across the bridge to Chouteau Avenue. The streetcars transported the school students back to their respective schools at the end of the day. 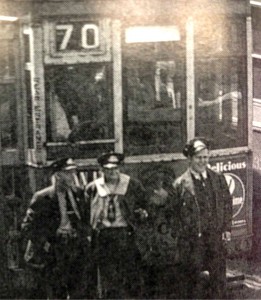