Who’s ready for a little home town baseball next week?! I am, and so is Flashback Friday!

Were you able to guess when and where this photo was taken? 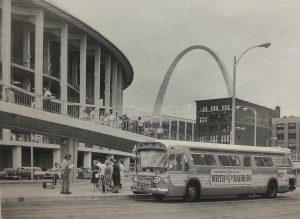 This photo provided by the Museum of Transportation was taken outside of what was the new Busch Memorial Stadium in 1966.

According to Andrew Young’s St. Louis and Its Streetcars, Sportman’s Park which was renamed Busch Stadium in 1953 closed at about the same time as the street cars in 1966. Pictured here, the Red Bird Express buses began running to Busch Memorial Stadium. Busch Stadium III opened in 2006.

Now, who is ready for the St. Louis Cardinals Home Opener?! Go Cards!