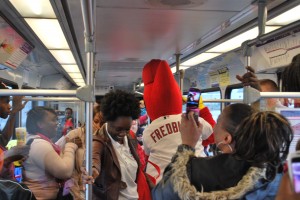 Two hundred children and adults anxiously awaited the arrival of the fun-loving mascot of the St. Louis Cardinals at the Grand MetroLink Station this past Saturday morning (Oct. 13). They were waiting to ride on a MetroLink train with Fredbird to the Delmar Loop Station to attend Child Safety Day at The Pageant. Plus they could hardly contain their excitement that Fredbird’s helpers from Metro were going to give away Cardinals merchandise to the children on the train.

The young Cards fans and their families were also energized because the Redbirds had pulled off an incredible late night playoff victory the night before over the Washington Nationals which put the Cards in the National League Championship Series against the San Francisco Giants.

The suspense grew as the 10:10 departure time approached without a Fredbird sighting and then, as the train pulled into Grand Station, someone yelled “There’s Fredbird!” and in a flash of red, Fredbird hopped on the packed train and we were off.

Cell phones were out in force as Fredbird posed for picture after picture with children and adults as he moved around the MetroLink car.  At the next station, Fredbird jumped off and joined other children, families and MetroLink passengers on another part of the train. Fredbird posed for more photos and was as entertaining as always with his silly antics–making passengers laugh as he “beaked” some of the kids, pretended to sit on others and shook his tail feathers at others. He moved about the car meeting Cards fans and then led them off the train when we arrived at the Delmar Loop Station. The crowd started following Fredbird to The Pageant for Child Safety Day. 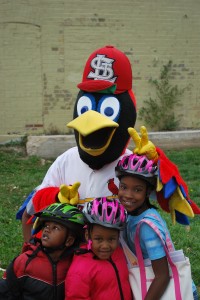 Fredbird wanted to make sure that the little fans and the big fans were safe crossing the street so he directed traffic to stop, adding in some comical moves. After arriving at Child Safety Day, Fredbird continued to meet and pose for photos with children and families,  the BMO Harris Bank mascot and police officers and firefighters. He was a hit everywhere he went at Child Safety Day.

He saw children at Child Safety Day being fitted for free bike helmets and indicated he wanted one too. We had to remind him his head was too big and the free helmets were for the kids.

In addition to receiving free bike helmets (300 were given away), a number of families took advantage of the free flu shots. The 6th annual event offered a wealth of information for parents and grandparents on how to keep children physically, emotionally and socially safe. There were demonstrations, booths and information about staying safe around train tracks, safe in the street, safe in the car, safe on bicycles, safe around strangers, safe on the Internet, and safe at home. The St. Louis Metropolitan Police Department, Missouri Highway Patrol, St. Louis Fire Department, St. Louis County Police, St. Louis Cardinals, Page Law, BMO Harris Bank, Home State Health Plan, INOBTR (I Know Better), BJC, St. Louis Children’s Hospital, Metro Transit, and other local businesses and groups sponsored the event. 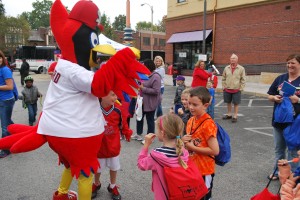 The weather was absolutely perfect for an October Saturday and the event was a huge success. It will be held again next year near The Pageant and Metro is looking forward to being part of this great community partnership in 2013.