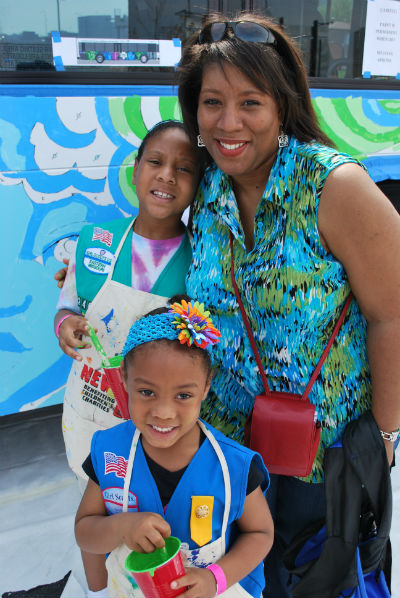 Metro Director of Program Development and Grant Tracy Beidleman and her daughters, both Girl Scouts

“We are thrilled work with Metro St. Louis on a project that is fun for our older girls, a great way to tell our story to the community, and an opportunity to invite everyone to celebrate our 100th Anniversary all year long,” said Donna Martin, CEO of the Girl Scouts of Eastern Missouri.

Saturday turned out to be a beautiful day for the Girl Scouts to paint murals designed by illustrator and graphic designer Steve Edwards on each side of the MetroBus. “My daughter’s a Girl Scout, my wife’s a troop leader, and both our mothers were Girl Scouts,” said Edwards. Edwards has designed for the Art Bus program before, including last year’s Art Bus for 100th Anniversary of the St. Louis Society for the Blind and Visually Impaired and the 60th anniversary of The Delta Gamma Center for Children.

Edwards said the murals for the Girl Scouts bus painting featured green, blue and magenta girls all carrying the Girl Scout ‘100’ together. “Just as each face is lit by the colors of the younger and older faces that surround it, we each carry a little bit of everyone else inside of us,” Edwards said. “Our community is strengthened both by what we have in common, and by what makes us different. We can learn from one another, we can build one another up in ways that surprise us all, and we can celebrate our next century together.”

“The MetroBus was transformed into a rolling work of art,” said David Allen, Metro Arts in Transit Director. “In about two weeks, this vehicle will join the Art Bus Fleet which is part of Metro’s Arts in Transit Program. The mural will stay on the MetroBus for one year and will travel various MetroBus routes around the area.” The Art Bus Fleet Program partners Metro with non-profit organizations in the community like the Girl Scouts of Eastern Missouri to raise awareness for their groups.