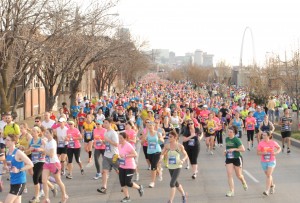 Race day is still a few days away, but before you head downtown this Sunday for the Go! St. Louis Marathon, Half Marathon and Marathon Relay, here’s what you’ll need to know if you plan to take Metro to get to the race or are a MetroBus customer.

The April 6th events will have a major impact on Missouri MetroBus routes in downtown St. Louis, areas of Soulard, Forest Park, Clayton and University City, and points in between. Street closures will begin early in  Sunday morning and will be in place until 4 p.m. on Sunday. Part of Market Street will actually shut down starting Saturday at 7 a.m. in preparation for Sunday’s events. That will impact two eastbound MetroBus routes, the #04 Natural Bridge and the #11 Chippewa.

Participants and spectators can park free at any Metro Park-Ride lot in Missouri or Illinois and take MetroLink to Downtown St. Louis. The Union Station and Civic Center MetroLink Stations are all within a few blocks from the marathon start and finish line. MetroBus riders can also get to the event by taking the #8 Bates-Morganford, #11 Chippewa, #73 Carondelet, or #80 Park-Shaw MetroBus route to the Civic Center Transit Center. Several other MetroBus routes will serve the Civic Center Transit Center after 9 a.m. Sunday.

The following MetroBus routes will be rerouted to the MetroLink Convention Center Station from beginning of service Sunday until 9 a.m.

After 9 a.m., these routes will resume service to the MetroLink Civic Center Station. Attendees can plan their MetroBus trips by using our Trip Planner.

Due to many streets being closed to accommodate the Go! St. Louis events, 21 MetroBus routes will be rerouted. MetroBus customers should allow extra travel time for their commutes Sunday to allow for the detours. The reroutes include the following:

Specific details and individual maps for each reroute can be found in the Rider Alert section on our website. 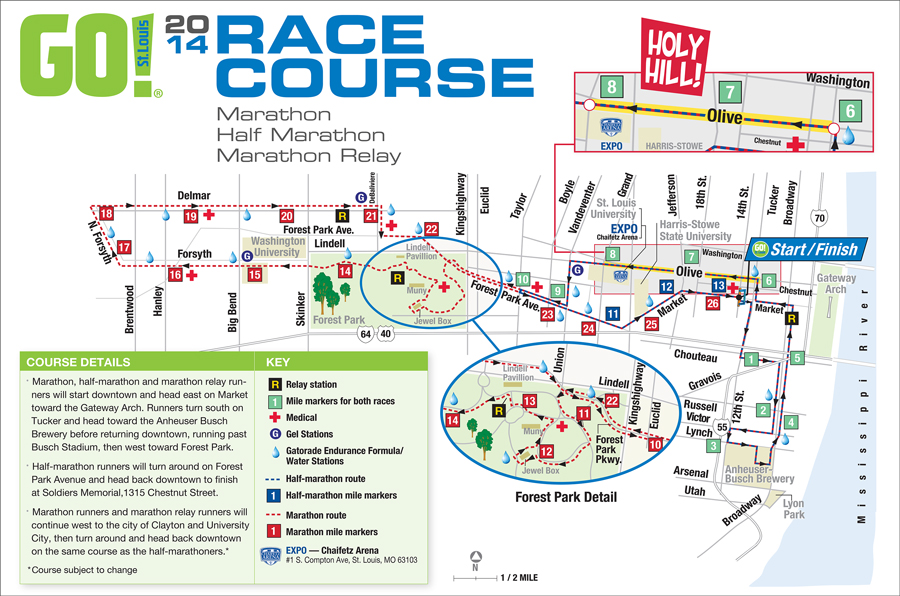 On Saturday, April 5, the Go! St. Louis Marathon and Family Fitness Weekend also features family friendly events like a 5K Walk/Run, Go! St. Louis Read, Right & Run Marathon, children’s fun runs and a mature mile walk in Forest Park. You can get to Forest Park Saturday by taking MetroLink to the Forest Park-DeBaliviere Station and walking into the park or by taking the #90 Hampton MetroBus route to the Missouri History Museum.