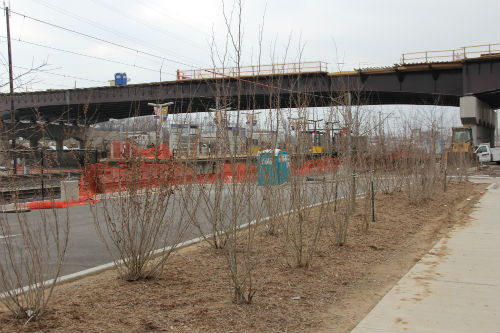 It’s time again for a Grand MetroLink Station project update, don’t you think? The mild weather we’ve been having has been a boon, but no construction project ever counts on the fine weather to last forever. So let’s talk about the project status element by element:

The Platform: The platform is very close to being finished. The new platform heaters have been installed and just need to be wired into place. The new walkway connector – remember, we added a connector at the west end and removed the one at the east end – needs hand rails installed. The fence needs to be patched where the old east connector used to be. And the ticket vending machines (TVMs) will be removed from the platform and relocated to the plaza area on the south side of Scott Avenue, where they will be easily accessible both to customers coming down from the bus stop above, and to customers using the new park-ride lot to the east.

The Park-Ride Lot: Done except striping and lighting. The weather made it easy to finish that part quickly. 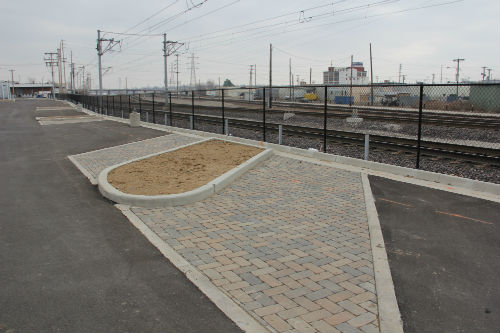 The Elevators: The new elevator towers have been installed, but  they will not go into service until Grand Avenue is open. At that time, they will be tied structurally into the bridge and the actual moving parts will be installed. 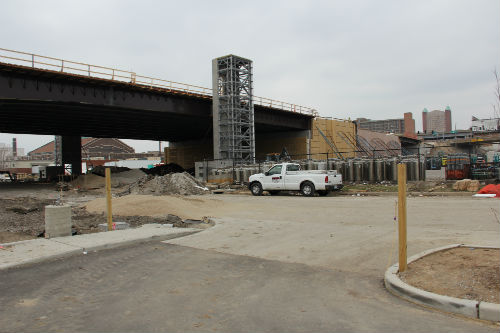 The New Plaza: The new plaza, which will be built under the bridge where the old bridge piers used to be, has been serving as a staging and work area for the bridge work. Work on the plaza features could not begin until the bridge work overhead was completed past a certain point. Metro and the City coordinate our work so that both of us can use the area as needed.

One of the very first things Metro is doing to start the plaza construction is utility work, including making new connections to a (newly relocated) water line. [I asked, “Why do we need to tie into the water line?” Turns out (duh) that we have to be able to connect hoses to wash the plaza areas and the platform, and for irrigation for the plantings. Seems obvious in retrospect; but I just hadn’t considered that aspect of building a new station!]

Scott Avenue: The street is all torn up from the construction, which was part of the plan. It will have to be rebuilt, but there’s no sense in doing so until all the heavy equipment is finished. Also, new utilities need to be run beneath the surface. When the street is completed it will feature a bus pullout at the plaza and a nice, new, safe pedestrian crossing.

Bus Stop Improvements: One of the last thing we’ll do is install the new wind shelters and signage up on the bridge. 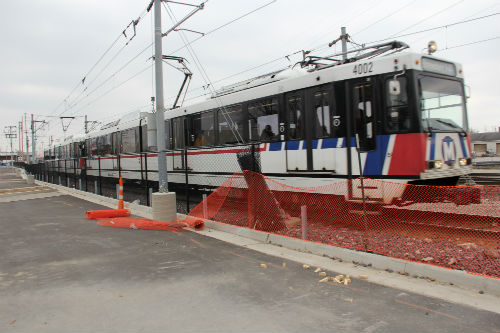 There are lots of different decisions that could be made that would affect the opening date, very importantly the construction status of the Grand Avenue Bridge. We’ll open as soon as we can do so safely, in a cost-effective way and in a way that will result in the best possible experience for our customers.