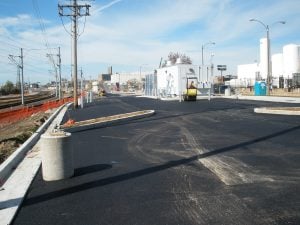 Still, it is a real nice parking lot.

If you ride MetroLink past the closed Grand stop, you may have noticed a lot of work progressing on the new park-ride lot. “Great,” you might be thinking, “a parking lot – just what we need to get the station re-opened!” But rest assured that there is less-visible work going on that will get the station completed on schedule.

Last week I spoke with Metro’s project manager and he told me that Metro and the City are still closely coordinating work on the two projects – the Grand Bridge overhead and the transit plaza below. Right now, the biggest piece of Metro’s project – the steel for the new, relocated elevator towers – is being fabricated off-site so that when the City is ready, Metro can install the new towers. We’ve also completed construction of the new platform access point (on the west end) and will soon remove the old one. 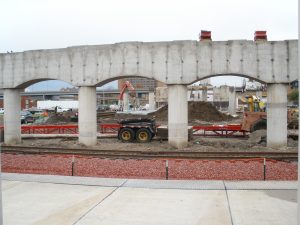 The contractors are also working on the communications room – that little building on the far west end of the platform. “It looks like a big piece was just sawed off the side of it,” the project manager told me, “because that’s just what happened when the elevator towers were removed. So we’re remediating that to make it look nice again.” The platform itself will be blasted, cleaned and sealed sometime this week. All in all, Metro’s transit project is proceeding as planned and is slated for completion by the May 15 target date.