Happy Birthday Bi-State! A Look Back at 61 Years as Interstate Agency

Today marks the 61st anniversary of the Bi-State Development Agency, known today as Metro.  On September 20, 1949, the United States Congress ratified an agreement between Missouri and Illinois, forming one of the first interstate agencies in the country.  The two states wanted one agency that would help drive regional economic development through the funding, ownership and operation of projects affecting the economy of the whole region.

Similar to the Port Authority of New York, Bi-State Development Agency was designed to handle projects that crossed state and local boundaries.  This includes public transportation, but that mission didn’t begin until 1963.  A few of the first projects the Agency tackled were the sewer problems in St. Louis County (which led to the establishment of MSD), water pollution in the Mississippi, coordination of interstate highway planning, and the creation of a comprehensive regional development plan.

By 1960, the plight of public transit was one of the top news stories of the year.  The city had many private transit firms, making transfers difficult and discouraging ridership.  In 1963, Bi-State took over operation of the transit properties it purchased from the area’s 15 private transit firms.  In addition to buses, the Agency continued to operate streetcars from St. Louis Public Service until the last streetcar, the Hodiamont Line, ended its run in 1966.

In 1964, Bi-State purchased Parks Metropolitan Airport in Cahokia, Illinois, now called the St. Louis Downtown Airport.  The historical airport was purchased from its original owner, Oliver Parks, who had planned to redevelop it as a housing subdivision.  During its earlier heyday, Charles Lindbergh had recommended the  airport in Cahokia to the Transcontinental Air Transport Service (now known as TWA) as his first choice for a St. Louis area hub.  Today, the Downtown Airport is the third busiest airport in Illinois, and second busiest in the St. Louis region.

When the Arch was nearing completion, Bi-State was asked to construct and operate the tram system that would begin carrying passengers to the top of the Arch in 1967.  Metro now operates the Arch trams as well as other riverfront attractions such as the Riverboats and bike rentals.

In 1986, Bi-State introduced Call-A-Ride, a demand-response service designed to provide accessible transportation for customers with disabilities in Missouri.

The first alignment of MetroLink opened in 1993, but the idea of rapid transit in St. Louis had been pursued since the 1960’s.  The MetroLink project was born amid a great deal of skepticism, but also with many passionate proponents.  Construction began in 1990 with right-of-ways over abandoned freight railroads, downtown tunnels, and the Eads Bridge.  MetroLink had further expansions in 1994, 1998, 2001, 2003, and finally in 2006 with the addition of the Shrewsbury (Cross County) Blue Line.

In 2010, Metro continued to look to the future with the creation of the region’s first Long-Range Regional Transit Plan, Moving Transit Forward.  The plan was approved by East-West Gateway Council of Governments in March 2010.  The plan includes possible new transit centers, bus rapid transit, MetroLink extensions and commuter rail. 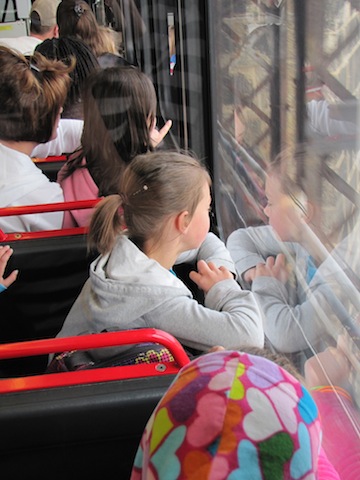 What will the next 61 years have in store for Bi-State?  One thing is for sure –  Metro wants to continue its important role in the livability and economic development of the region.  Right now, Metro is working on facilitating transit-oriented development relationships, and fostering more private-public partnerships, such as the Downtown Trolley, to create better opportunities and services throughout the region.  At 61 years old, we’ve still got a lot more work to do.

2 thoughts on “Happy Birthday Bi-State! A Look Back at 61 Years as Interstate Agency”