Here’s How to Take Metro to Fair Saint Louis 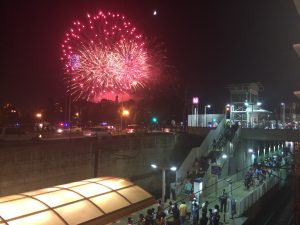 Fair Saint Louis returns to Forest Park this year, and Metro transit is a great option for fairgoers, workers and volunteers who are looking for a safe and convenient way to get to the festivities. To accommodate fairgoers, Metro will provide additional MetroLink service on Thursday, July 2, Friday, July 3, and Saturday, July 4, in anticipation of large crowds at the annual celebration. 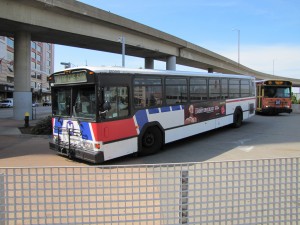 Most MetroBus routes connect with MetroLink. Plan your trip to Fair Saint Louis using Trip Planner. The #3 Forest Park Trolley will not be in service for the duration of the fair, July 2-4.

Metro employees and public safety officers will be working hard to safely and efficiently transport fairgoers during and after the fair. Trains will be crowded, especially after the fireworks shows each night, so passengers are asked to be patient and respectful of others. No eating, drinking or smoking (including e-cigarettes) is allowed on Metro vehicles and Metro property. For those bringing strollers on the MetroLink, please be prepared to fold them up before boarding the train. Alcohol and firearms are prohibited on Metro vehicles and Metro property, and no alcohol or coolers are allowed at the fair. Pets are not permitted on Metro vehicles, except for service animals.

Metro customers can park for free at 20 Park-Ride lots at MetroLink stations in Missouri and Illinois and ride MetroLink to the Forest Park-DeBaliviere or Skinker Stations to get to the fair. In Missouri, free Park-Ride lots are located at the North Hanley, UMSL South, Rock Road, Wellston, Delmar Loop, Grand, Shrewsbury-Lansdowne I-44, Sunnen, Brentwood I-64 and Richmond Heights MetroLink 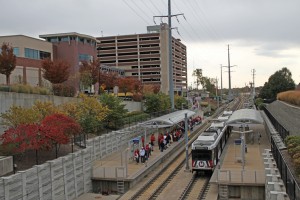 A total of more than 10,000 free parking spaces are available, with approximately 1,200 available on July 3 and July 4 at the Brentwood I-64 Meridian garages. Metro customers will be able to park on all levels of the garage as well as all levels of the adjoining garage thanks to the generosity of DCM Group. Other Park-Ride lots with large numbers of free parking spaces include the North Hanley MetroLink Station with 1,700, Fairview Heights Station with 850, Emerson Park Station with 800 and Shrewsbury-Lansdowne I-44 Station with 800. The Forest Park-DeBaliviere MetroLink Station Park-Ride lot will be closed for the duration of the fair.

Metro employees and ticket agents will be at high volume MetroLink stations along the system to assist fairgoers all three days. For only $5 for a round trip, fairgoers can ride MetroLink to Fair Saint Louis. To help reduce delays in their return trips, passengers are encouraged to purchase two one-ride tickets and to validate one ticket before boarding the train to the fair and to validate the other ticket when boarding MetroLink for the ride home.

Metro customers can transport their bicycles on MetroBus or MetroLink. Bicycle racks are located on the front of all MetroBus vehicles. On MetroLink, Bicycle Parking Zones are located in the doorways at the 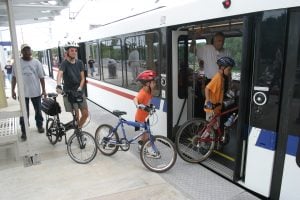 rear of the first train car, as well as the front and rear of the second train car. Two bicycles are permitted per Bicycle Parking Zone, as well as an additional bicycle belonging to a child accompanied by an adult. Due to large fair crowds taking MetroLink, there may be a lack of room in the designated bicycle areas, and passengers with bicycles may be instructed to wait for a less crowded train. Metro customers bringing bicycles on board are urged to allow all other passengers to board before loading their bicycles on the train car. Passengers must remain with their bicycles at all times and cannot park their bicycles on the steps inside the MetroLink cars. Metro operators cannot leave the bus or train to assist passengers with loading or unloading their bicycles.