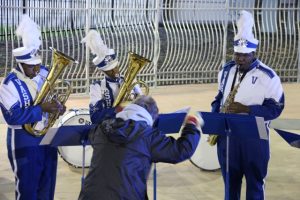 The Vashon High School Drum Line and Pep Band will perform a 30-minute concert at 5 p.m. today (Dec. 11) at the Grand MetroLink Station. The performance in the Scott Avenue Transit Plaza area is free to the public.

This Saturday, Dec. 13, Retro Boogie will play on the Holiday Magic Train. Their performance gets underway at 1:02 p.m. at the Fairview Heights MetroLink Station, and they will play their funky sound as the festively decorated train travels along the Red Line to the Lambert Airport Terminal 1 MetroLink Station and then returns to the Fairview Heights Station at 3:01 p.m.

Honeyvox will perform on board the Holiday Magic Train the next day, Sunday, Dec. 14. That concert will begin at 2:02 p.m. at the Shiloh-Scott MetroLink Station. You can expect high-energy dance tunes and holiday favorites while the train travels along the Red Line to the Lambert Airport Terminal 1 MetroLink Station and then returns to the Shiloh-Scott Station at 4:41 p.m.

Kevin Mitchell 4 performed on the Holiday Magic Train December 6. Video and photos below.

Our holiday photo contest will add some smiles to your MetroLink commute during the holiday season. You are invited to take pictures at special areas on the train for a chance to win free tickets to a St. Louis Rams game.

The Holiday Magic Train is a partnership between the St. Louis Convention and Visitors Commission and Metro transit. This is the fifth year the train has been in service. You will find the festively decorated Holiday Magic Train on the Red Line on Mondays, Wednesdays and Fridays and on the Blue Line on Tuesdays and Thursdays through the end of December.