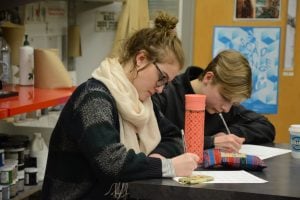 Thirteen students at Crossroads College Preparatory School in St. Louis took part in the creative process this week, brainstorming ideas to add to a new mural planned for the Forest Park-DeBaliviere MetroLink Station. The school is located in the same neighborhood as the MetroLink station– just a few blocks north on DeBaliviere.

Con Christeson, one of the two St. Louis artists working on the Metro art project, led the session with the students. Their objective was to come up with text and written elements that could be added to the mural.

“The first time I set foot at Crossroads I was struck by the exceptional curiosity and inquisitiveness of the students,” said David Allen, director of Metro Arts in Transit. “The project’s artists picked up on that too. We immediately knew that these young sharp minds could help shape the mural’s design. They bring a unique viewpoint that should be considered on a lot of topics, not just the arts.”

Christeson and artist Catharine Magel are working together on the mural design, which will be placed on a concrete retaining wall that is fully visible from the Forest Park-DeBaliviere Station platform. Magel is best known for her mosaic sculpture and large-scale murals. She created the massive tree sculpture at the UMSL South MetroLink Station. Christeson has collaborated on several projects for Metro Arts in Transit, creating artwork for the North Broadway and Gravois-Hampton MetroBus Transit Centers. 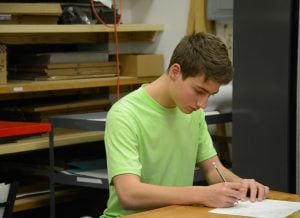 Charlotte, 17, said the mural should highlight the Forest Park-DeBaliviere neighborhood, but also include features unique to the St. Louis region, such as the region’s historic red brick.

“I love St. Louis, but I’m moving away in the fall for college,” she said. “It’ll be really, really cool to come back here with my friends and tell them that I had a part in this, that I contributed to this city.”

To get his creative juices flowing, Gabe, 17, doodled a few sketches on a piece of paper. The images seemed random, until he was able to explain his process.

“I think, at first, people will be taken back a little bit,” he said. “Then they’ll look at the rest of the picture and they’ll start to see the connection to St. Louis and they’ll realize that it’s more than just a complicated, weird picture.”

A final design of the mural is expected this spring, with installation completed later this year.