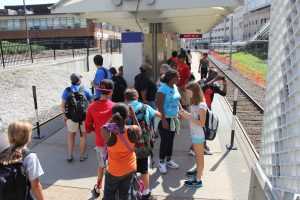 Maplewood Richmond Heights Middle School (MRHMS) students and their teachers set out on a “MetroLink Expedition” on a beautiful Friday morning earlier this month. As the name implies, the trip focused on exploring MetroLink Stations. Fifty-nine seventh grade students boarded a morning train from the Maplewood-Manchester MetroLink Station in St. Louis County and then split up into eight groups to discover and learn about eastbound and westbound MetroLink stations and their surroundings.

The MetroLink Expedition was designed to fulfill a geography segment of the school’s social studies curriculum. The students were on a mission to compare and contrast several MetroLink Stations in the St. Louis area. Each student group was asked to observe how five themes of geography – movement, region, location, interaction, and place – appear at each MetroLink Station. Other goals of the assignment were to understand how a location and environment impacts a person, to understand and experience the diversity of St. Louis, and to be excellent ambassadors for MRHMS by exhibiting the cornerstone traits of stewardship, scholarship, citizenship, and leadership. All of it was designed as a completely mobile expedition: the students used no pens, no papers and no workbooks. The assignment was compiled using instructions on an iBook and digitally recording photos and video on iPod touches.

“We spent the entire day prior to our social studies expedition prepping the seventh grade students by going through an iBook presentation, which detailed almost every aspect of our expedition and our mission,” explained MRHMS social studies teacher Alexandra Mooney. “The students were then put into small groups and assigned two MetroLink Stations where they would identify all five themes of geography and then compare and contrast both stations.”

The first stop for Mrs. Mooney’s class was the East Riverfront MetroLink Station in East St. Louis, Illinois. Mrs. Mooney and MRHMS math teacher Ben Ryan led the students down the steps from the station platform for a panoramic view of Illinois, the Mississippi River and downtown St. Louis. The students spoke excitedly about being in a different state, seeing the river and The Gateway Arch Jefferson National Expansion Monument. All sights and geography themes were digitally documented during the time spent at the East Riverfront MetroLink Station.

The other groups of students from MRHMS reunited with Mrs. Mooney’s group for a bag lunch in Forest Park. After lunch, all 59 students participated in a post-expedition reflection and group discussion. It was an opportunity to share observations and digitally document the different assessments made by other group members at the different MetroLink Station stops.

“This was an amazing expedition and a fantastic day. MRHMS has been doing the MetroLink Expedition (or modified versions) for 10 years,” said Mrs. Mooney. “I hope the students realized how easy and convenient it is to explore the St. Louis area, its people and its diversity.”

Mrs. Mooney posted her blogs about the MetroLink Expedition with links the students’ photo art and video projects.

Earlier this year, Metro employees researched each of the 37 MetroLink stations on the system and created profiles for each one.