UPDATE AS OF 12/4: Crossroads College Prep Jazz Ensemble will no longer be able to perform on Thursday December 6 or December 13.

The holiday spirit has hit Metro! Today some Metro customers and the media got a sneak peek at this year’s Holiday Magic Train. 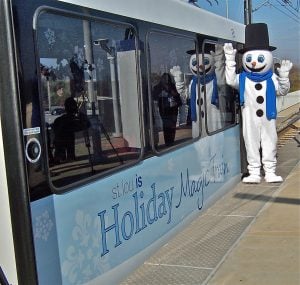 Metro Communications Director Dianne Williams, CVC Chief Marketing Officer Brian Hall, and the CVC Holiday Magic mascot Snowflake rode the Holiday Magic Train to the Shrewsbury MetroLink Station to greet customers and welcome them aboard. The looks on passengers’ faces were priceless: Some were confused, some were excited, and all were smiling!

Snowflake, Hall and Williams arrived on the Holiday Magic Train at the Shrewsbury MetroLink Station shortly before 10:30 a.m. this morning. All of the customers aboard the train were greeted by the cheerful sound of holiday music sung by the St. Louis Christmas Carols Association. 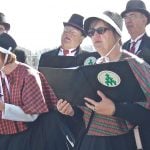 Williams announced that this year there will be even more festive holiday music along the MetroLink system.

On Saturday, December 8, classical duo “Chamber Project St. Louis” is scheduled to perform from 12:12 p.m. to 2:11 p.m. on the Holiday Magic Train which will be on the Blue Line from Fairview Heights to Shrewsbury and back.

On Saturday, December 15 you can hear the hot jazz sounds of “Miss Jubilee and the Humdingers” on the Red Line between Fairview Heights and Lambert-St. Louis International Airport and back to Fairview Heights from 1:22 p.m. to 3:21 p.m. 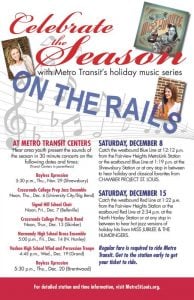 You can join the concerts by using your Metro pass or buying a ticket to ride anywhere along the route.

The Holiday Magic Train is set to go into service for the season this Friday. (All scheduled dates are subject to change due to service issues.) 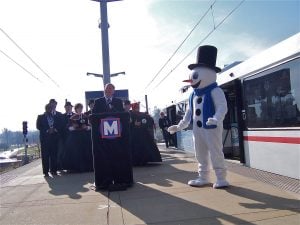 During Holiday Magic this year, there are tons of activities for kids and adults. Children can have their photos taken with Santa, check out performances by the Purina Incredible Dog Team, play with some critters at a petting zoo, and watch a culinary demonstration by Lumiere Place Casino & Hotels and River City Casino. Kids can ride on 10 full scale carnival rides and a trackless Holiday Magic train.

There is a kid’s activity area where the little ones can get their faces painted,  build a birdhouse with the Carpenter’s Union, play in the Rams Pass, Punt and Kick Zone, Paint-a-Poinsettia, decorate a holiday cookie and so much more. Game will also be provided by Radio Disney.

While at Holiday Magic event,  don’t forget to check out, my personal favorite, the photo booth!

To view more pictures from the unveiling of the Holiday Magic Train click here.